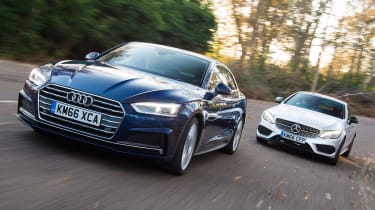 They say never to mix business with pleasure, but in an automotive context there are a few options that blend the two spheres very adeptly.

The latest to join the ranks is the two-door Audi A5 coupe. It takes tech first seen on the A4 saloon last year and adds even more style and sophistication to the saloon’s quality feel and low running costs. The A5 promises to appeal to your heart and your fleet manager. 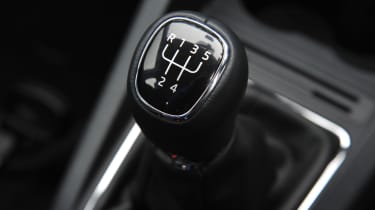 However, Audi’s arch rival Mercedes has already done the same to great effect with its C-Class Coupe. This car serves up a beautifully built cabin, svelte coupe styling and, in the popular C 250 d model we test here, a diesel engine that blends strong efficiency with plenty of performance. So the A5 2.0 TDI has its work cut out. 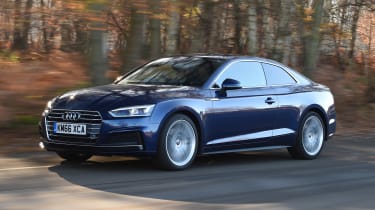 Audi’s evolutionary approach to design means you’d be excused for blinking and missing the changes in the transformation from the previous-generation A5 to this all-new coupe.

Yet it genuinely is all-new, because the chassis has been adapted from the clever new MLB Evo mechanicals that underpin the A4. The big difference between this and the MQB platform that forms the basis of the A3 is that the MLB tech can take longitudinally mounted engines.

In our A5 test model, the 2.0-litre diesel engine drives the front wheels, which is one of the main differences between the newcomer and the rear-wheel-drive C-Class Coupe it’s up against. 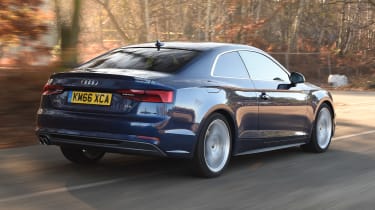 It’s a 187bhp unit hooked up to Audi’s seven-speed S tronic dual-clutch box. And it’s a known quantity shared with other models in Audi’s line-up, so it pulls well, and with 400Nm of torque it offers plenty of in-gear performance. At the track the car covered 50 to 70mph in sixth in 9.9 seconds, despite tall gearing (it wouldn’t do the same sprint in seventh) compared with the nine-speed Mercedes.

The MLB Evo chassis shares many of the attributes that make MQB cars like the A3 impressive to drive, so the A5’s steering is light and direct, even in Comfort mode.

Switch the Drive Select set-up to Dynamic and there’s more weight, but not a noticeable improvement in precision. As our test car wasn’t fitted with the £600 optional adaptive dampers we’d recommend sticking with Comfort mode as the lighter steering feels more relaxed but just as precise and more transparent than in Dynamic. 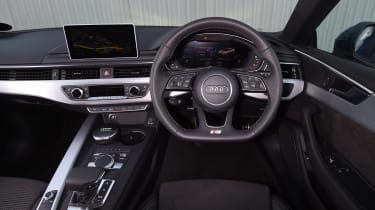 Left to its own devices the gearbox also shifts up earlier in Comfort, helping efficiency. Changes are fast and smooth, while the dual-clutch transmission’s launch control meant the A5 sprinted from 0-60mph in 7.5 seconds.

Coupés like this are about more than just performance and handling, though. With diesel engines such as the 2.0-litre TDI in our test model, the Audi is more likely to spend its time on the motorway, which is where features like the £250 Virtual Cockpit come into their own.

The 12.3-inch widescreen display shows the sat-nav straight in front of you, making it easier to follow the route guidance, while you can also change the radio station and look at the car’s efficiency data through the different menus.

It’s a hi-tech feature that fits well with the A5’s well crafted cabin. Build quality is brilliant throughout, with a simple but smart layout to the centre console adding to the premium feel. 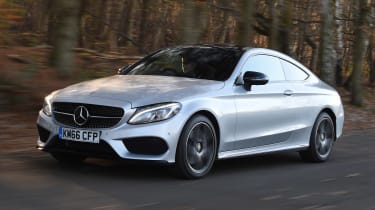 The C-Class Coupe is a strong all-rounder, which makes it the car the A5 has to beat. It’s based on the same platform as Mercedes’ four-door C-Class, but the two-door has a more distinct personality, whereas the A5 definitely feels like a derivative of the A4 saloon.

From behind the wheel, the Mercedes isn’t quite as sharp as the Audi, but the rear-drive chassis offers more balance. It’s just a shame the rest of the experience doesn’t live up to the looks; in Sport or Sport+ driving modes, the C-Class’s steering feels heavy and lifeless. While there isn’t much feedback relayed through the Audi’s wheel, its lighter steering weight and immediacy makes it feel more transparent.

Even after only a few miles in the driver’s seat, it’s clear the C-Class Coupe isn’t as sporty or precise as the A5. Instead, the focus is definitely on comfort, as the Mercedes rides nicely. 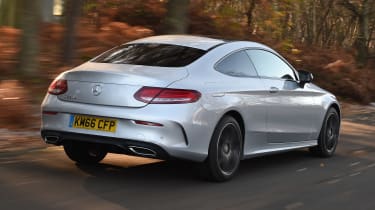 Engineers have scaled down what makes the S-Class flagship so comfortable, but while it’s cosseting most of the time, the C-Class isn’t perfect. Even though our test car had the £895 Airmatic dynamic handling package, featuring air suspension, the set-up still transmits some harsher knocks through to the cabin.

This is only under more extreme conditions on broken roads, as the Mercedes still floats over most surfaces with a more settled gait than the Audi.

It’s more relaxing to drive as a result, but with the C 250 d’s higher-powered 2.1-litre diesel under the bonnet, the car delivers a decent turn of speed. There’s 201bhp and 500Nm of torque – 14bhp and 100Nm up on the Audi – so even though the C-Class is chunkier, weighing 1,645kg, it was seven tenths faster from 0-60mph, using its extra gears to complete the benchmark sprint in 6.8 seconds. 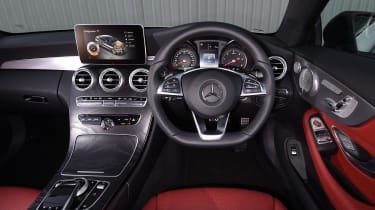 In-gear performance was also impressive, thanks to the shorter ratios and extra punch from its engine compared with the Audi’s; the C-Class delivers its maximum torque low down from just 1,600rpm, so there’s not much lag to contend with.

The conventional nine-speed automatic box does a good job of changing gear quickly when you want maximum performance, but it’s not as swift-shifting as the Audi’s dual-clutch unit. Yet like the chassis, it’s better at offering maximum refinement and changes almost imperceptibly in Comfort mode.

There’s not quite as much tech on offer as in the Audi, but build quality is not far off, while there’s enough connectivity from our Mercedes test car’s COMAND online infotainment system to make the C-Class Coupe fairly simple to live with. 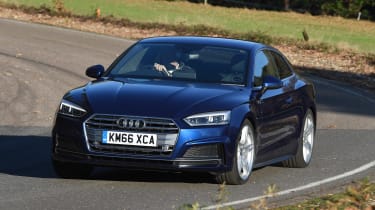 The A5 is more efficient on paper, so will be a cheaper company car, which is crucial here. It’s also more practical, gets more kit and offers advanced tech – although it was still a close result. The new Audi can’t match the C-Class’s sense of style or its more settled ride, but offers enough to take top spot here. 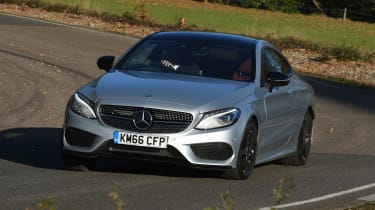 While the C-Class is the more emotively styled coupe here, in diesel form, where the sums have to add up as well, it lives in the Audi’s shadow. It doesn’t offer the same level of connectivity, and although the cabin is solid, the A5 is easily its equal. However, the ride means the Mercedes is more relaxing.