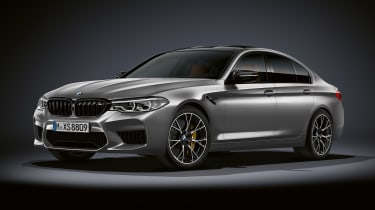 This is the BMW M5 Competition Pack - the most focussed version of Munich’s super saloon. It gets increased performance and firmer suspension setup to give the Mercedes-AMG E 63 S a bloody nose.

The increased performance comes courtesy of a reworked version of the 4.4-litre twin turbo V8 engine. Power is up 25bhp to 615bhp, and although torque plateaus at the same 750Nm, it now spreads from 1,800-5,800rpm - 200rpm higher than before. A Competition pack-specific exhaust system, housed in a unique diffuser, gives a unique soundtrack, and the tips are finished in black chrome. 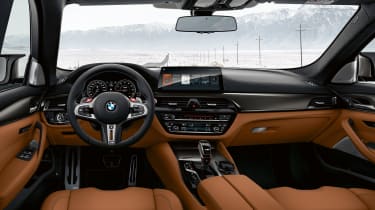 Behind the wheels sit a raft of suspension tweaks to make the Competition Pack sharper to drive than its sibling. Spring rates have increased by 10 per cent all round, while the ride height drops a further 7mm. Extra camber has been dialled into the front axle, and the rear gains a stiffer anti roll bar. Stiffer mounts for the front anti roll bar, engine and toe links are all claimed to make the steering feel more precise and direct.

The adaptive dampers have been returned to match the more aggressive suspension setup. Sport mode is said to be the setting most suitable for the Nurburgring Nordschleife, while Sport Plus is intended for smooth Grand Prix circuits.

Little has changed inside the Competition Pack; the changes are limited to M Sport stripes on the seat belts and unique carpet mats.

Prices haven’t yet been confirmed, though the Competition Pack added £6,700 to the previous generation M5 when equipped. Expect to pay just under £100,000 when sales start.

Read our UK review of the latest BMW M5 here.