Being based on the sublime 5 Series, the BMW M5 has an incredibly solid foundation to build from – and the German brand has judged the transformation from executive saloon to performance car almost perfectly. The chassis is superb and handles British roads very well while still feeling serious enough for a racetrack, and there’s loads of kit on board to make the M5 useable every day as well. The four-wheel drive system doesn’t feel restrictive to the experience and has enough of a rear-drive bias for this new M5 to feel worthy of the legendary badge.

The BMW M5 badge has been around for over 30 years, and over that time has built up a heavyweight reputation. It’s been the benchmark for the supersaloon class for pretty much all of that time - but when the 604bhp Mercedes-AMG E 63 S appeared last year it seemed that Mercedes finally had a proper answer to the Bavarian beast.

Now though, the sixth-generation BMW M5 has arrived in the UK, and it’s ready to show the E-Class who’s really in charge. There’s a new 4.4-litre twin-turbo V8 with 592bhp and 750Nm of torque and a new eight-speed automatic gearbox - it’s a definite step on from the last model and enough to challenge the E 63. Another key change is that the M5 is now four-wheel drive, after decades of rear-drive only models.

It means the car can go from 0-62mph in just 3.4 seconds. A few years ago we thought the only cars capable of that kind of pace would be lightweight missiles like the Caterham Seven, but the clever drivetrain on this new M5 means it’s now possible in a two-tonne family saloon. We can confirm that the acceleration is as incredible on the road as it looks on paper, too. 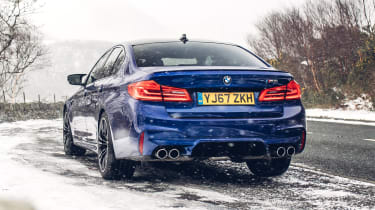 The fact that power is now also sent to the front wheels adds off-the-line traction and means there’s a bit of extra security in tricky conditions but unlike some four-wheel drive systems, the M5’s doesn’t take away from the driving experience. Most of the time the M5 feels like a rear-wheel drive car with all the benefits that brings to the way it feels on the road, but there’s help from the front wheels when needed as well.

It’s a shame the steering is a bit light and short on feedback, but the BMW does feel more agile than you’d expect given how big and heavy it is. Selectable driving modes mean you can add weight to the steering if you want, but it still feels artificial.

You can also choose between 4WD, 4WD Sport and 2WD modes for the drivetrain. The M5 gets progressively more driver-focused as you toggle through them, with the last mode being only for use on track, as 592bhp is a lot to be sending to just the rear wheels. You can also choose from three modes each for the steering, suspension and engine, these getting progressively more sporty, too. Then there are six different gearbox modes you can toggle through using a switch on the shifter: three for automatic mode and three for sequential manual shifts.

The BMW’s incredible performance and sweet chassis mean that whatever mode you’re in it’s a true driver’s car: so much so you could forget you’re driving a large saloon. But that’s exactly what it is, so the fact that in Comfort mode the suspension is soft enough to remain comfortable on UK roads is a huge plus. This really is a supercar you can commute in every day - although the large alloy wheels mean the low-speed ride is a weak point, as it’s a bit choppy over potholes around town. 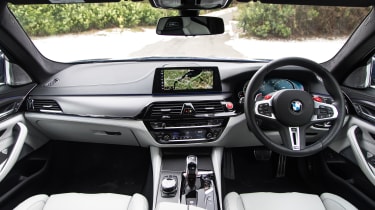 The BMW M5 certainly softer in Comfort mode than the Mercedes-AMG E 63 is in its softest setting - on the motorway the Mercedes feels fidgety and never quite settles down, but the BMW manages to stay relaxed and is a better companion on longer trips.

But something that makes the Mercedes really stand out is its V8 engine. It’s more characterful than the 4.4-litre V8 in the BMW, so even though the performance in both cars is closely matched, it’s more fun to put your foot down in the Merc.

Still, the M5 driving experience overall more than makes up for the slight lack of drama when you squeeze the throttle, and it’s not like the BMW M division engine is dull by any means. The BMW also has a much better driving position, so it’s comfortable to sit in no matter what sort of driving you’re doing.