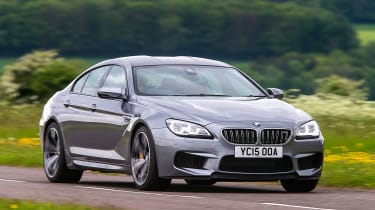 Apart from the i8 supercar, the M6 Gran Coupe is the most expensive car BMW sells. Sitting second from the top of the range, it represents the best of the brand’s power, style and luxury. More practical than the M6 Convertible and Coupe, and more stylish than the M5 saloon, it shares its 4.4-litre twin-turbo V8 with these models, but promises to be even faster thanks to neat weight-saving measures.

For 2015 BMW has enhanced the offering slightly with minor cosmetic changes and some extra standard kit. There’s now a revised Competition Pack which takes power up to 592bhp - higher than ever before.

For a car that weighs almost two tonnes, the M6 Gran Coupe handles brilliantly. The Active M differential shuffles torque across the rear axle to the wheel with the most grip, which helps the car place its 552bhp and massive 680Nm of torque on to the road. Even so, on wet tarmac it troubles the traction control, although the system cuts power smoothly and never stops the M6 from feeling savagely quick.

With crisp shifts, the seven-speed dual-clutch gearbox is fantastic, and the engine itself is packed with character. It’s smooth and quick to rev, and sounds fantastic between 6,000 and 7,000rpm. Plus, every full-throttle upchange comes with a growling exhaust note.

Problem is, the M6 is so fast that it’s hard to give it free rein on the road without breaking the speed limit. The 0-62mph sprint takes just 4.2 seconds but if you want to go even faster there’s the Competition Pack upgrade which now boost engine power by 40 horses to 592bhp while torque is up to a cool 700NM. 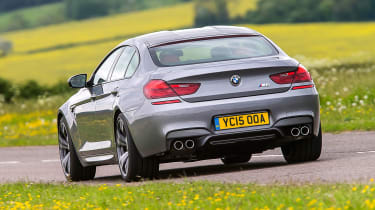 The steering doesn’t have the most natural of weighting, but there’s more feel than in an Audi RS7 Sportback and it turns in well for a big car. Plus, despite the heavy V8 in the nose, the M6 doesn’t suffer from excessive pitch and roll. The wide tyres follow cambers and the car squirms a little under braking, but the £7,395 ceramic brakes deliver strong stopping power.

There’s a slightly over-complex range of adjustment, but the BMW allows you to change the engine, dampers and steering independently across three settings, while the dual-clutch box has three shift speeds. We found that Sport was the sweet spot for the engine and steering, but the damping is best in Comfort, where the M6 becomes a reasonably effective cruiser.

Like any big V8, the M6 isn’t going to be cheap to run. And while for 2015 BMW has improved the efficiency slightly they are so marginal not to matter. Still economy is 28.5mpg isn’t as bad as it could be for a car with this much performance though CO2 emissions of 231g/km, means it sits in the 35 per cent company car tax bracket, which means a higher-band earner will pay £13,553 a year in tax.

For private buyers, residual values are a big concern. Our experts predict the M6 Gran Coupe will lose over £5,000 over three years, but then the retained value, is still almost identical to an Audi RS7 Sportback. Group 50 insurance means more big bills. Fixed-price servicing makes it easy to budget for maintenance, but you can expect to spend plenty of money on fuel.

The M6 Gran Coupe is more expensive than an Audi RS7 Sportback, with a price tag just shy of six figures, which is a lot for a BMW. Fortunately, the combination of the four-door coupe’s grand proportions and the racy detailing you’d expect of an M car gives the big M6 real presence, and it certainly attracted plenty of attention on the road. Unique styling features include a twin-spoke grille design, bigger air intakes and quad exhausts, plus stylish 20-inch alloys.

For 2015 the front and rear bumpers have been revised, there’s a new grille design and LED headlamps are standard. Like the M6 Coupe, the Gran Coupe gets a carbon fibre roof to help lower the centre of gravity and minimise weight. And because it’s nearly five metres long, the BMW has a longer wheelbase and shorter overhangs than the Audi.

The wraparound dashboard is covered with soft-touch leather and carbon fibre weave. With standard-fit electric sports seats, the driving position is excellent, while the switchgear is familiar from the rest of the BMW range. The revised model gets an updated iDrive infotainment screen, heads up display and Merino leather as standard, which was previously a £5,000 option!

A steering wheel inspired by the eighties Z1 roadster’s is great, while the frameless windows add to the coupe feel, although the sweeping A-pillars block your vision a little. As with the Audi, you might reasonably expect something a bit more special for a near-six-figure price tag, but our car featured £560 soft-close doors and £695 four-zone climate control.

With a longer wheelbase than its main rival, the Audi RS7 Sportback, the M6 has decent rear legroom, and the low roof doesn’t cut into headroom too badly. The 460-litre boot is deep enough to accommodate large suitcases and the rear seatbacks fold down to free up a maximum 1,265 litres of space. 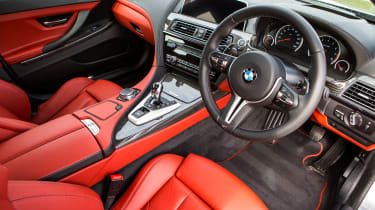 However, BMW’s traditional saloon boot is less practical than the Audi’s hatchback style tailgate. Our M6 featured £695 keyless entry, plus a £330 reversing monitor and £530 surround view camera, both of which make manoeuvring a car of this size a little easier.

BMW ranked in 15th place in our Driver Power 2013 satisfaction survey, with its dealers a disappointing 24th. At least the 4.4-litre engine has been tried and tested in the M5, while many of the other mechanicals are proven elsewhere in the BMW range.

However, a few M5 owners have reported electrical gremlins – hopefully these will have been ironed out on the Gran Coupe. The huge range of optional safety equipment includes surround-view, BMW Night Vision with pedestrian recognition, Park Assist, Lane Change Warning System and a Lane Departure Warning System.