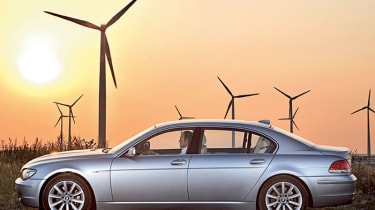 There are still plenty of problems to overcome, but hats off to BMW for putting a hydrogen-powered car into production. While it’s only offered as a fleet lease for now, it can’t be long before it’s made available to private buyers. The onus now falls on governments and fuel companies to provide suitable hydrogen filling station infrastructures in Europe.

Meet the world’s first gas-powered luxury car! This is BMW’s Hydrogen 7, a saloon with the ability to run on liquid hydrogen as well as petrol.

And it’s no one-off concept. The Hydrogen 7 is built on the same produc-tion line as BMW’s other 7-Series, and about 100 will be delivered to business-lease customers across Europe in 2007 for around £1,600 a month.

Six are expected to come to the UK for Government evaluation. So how does it work? Well, the Hydrogen 7 features a 6.0-litre V12 engine – the same as the range-topping 760i on which it is based, but optimised to run on hydrogen – plus a 74-litre petrol tank, and another chamber in the boot containing 8kg of liquid hydrogen. Using a button on the steering wheel, the driver switches between the two fuels.

From the outside, the only clues are some modifications to the rear bumper to accommodate the hydrogen system’s pressure-control valves. That’s a vital safety feature, as is the double skin on the high-pressure tank in the back. However, performance isn’t as im-pressive as that of the regular petrol car. Because hydrogen doesn’t produce as much energy as petrol, the V12 develops only 260bhp, so covering 0-62mph takes a leisurely 9.5 seconds. And those figures are the same when running on petrol, too, because the car’s electronic control unit prioritises the use of hydrogen.

Fuel economy isn’t great, either. The hydrogen tank has a range of only 125 miles and, with few suitable filling stations, the petrol tank is a necessity. There’s also the issue of how to make large quantities of hydrogen in an en­vironmentally friendly way. But, as with the Mazda RX-8 Hydrogen RE tested in Issue 925, the Hydrogen 7 is really a stepping stone. And, like Mazda, BMW is also working on hybrids which will probably use hydrogen fuel cells. For now, this 7-Series shows truly luxury green production cars have arrived.