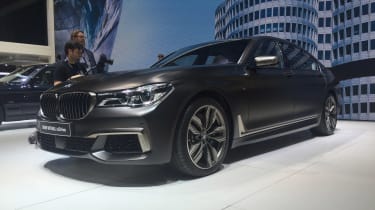 BMW has revealed the M760Li xDrive at the Geneva Motor Show. However, M boss Frank van Meel has told Auto Express that the flagship 7 Series is even faster than they originally thought.

The manufacturer had previously quoted 592bhp from the 6.6-litre twin-turbo V12 and 0-62mph in 3.9 seconds. But van Meel and his team of engineers have been pleasantly surprised by the car’s official output, during recent testing in Sweden.

“The car is so fast. It’s more or less a pure M – but it still has pure comfort. We did the homologation tests last weekend and adapted our official data today to 600bhp and 3.7 seconds to 62mph.” Top speed is still limited to 155mph.

“Naturally, we took the highest performing engine”, he told us. “It’s really fast”. 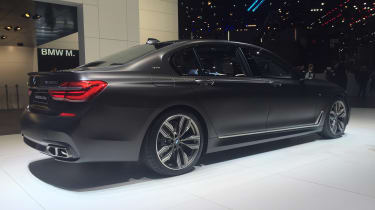 The figures come thanks in part to the xDrive four-wheel drive system, but the car gets a rear-wheel bias for better handling, as well as specifically tuned suspension. The brand's Dynamic Drive system reduces body roll as well, and BMW says that despite the 7 Series' bulk, this M760Li version delivers a sporty driving experience. The new quad-exit exhaust system should help in the sound department, too.

We asked van Meel why BMW gave the 7 Series an M Performance makeover, rather than a full-fat M7 badge. He said: “BMW never had an M model on its flagship 7 Series, so if you look at the competition you see an S63 and an S65 AMG, as well as an S8 and S8 Plus at Audi – and the market is increasing. So obviously there is a big demand for those kind of cars.

“Now the question for BMW was, are we going to do a pure motorsport, race track driving car? It’s a little bit of a conflict if you see the 7 Series as the most luxurious but still very dynamic car. Bringing those to an extreme would be really, really hard”, he said. “So the pure M - from our perspective - would be too much for a 7 Series.” 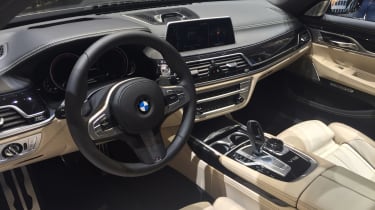 He later said: “We wanted to have the balance between high performance and every day usability. You can drive it like a race car but still have high levels of comfort”.

The car also gets 20-inch lightweight alloy wheels, and other visual changes include a new front bumper design with larger air intakes, extended sills below the doors and a new apron design at the back to accommodate some larger exhaust pipes. There's also an optional spoiler on the back if you want one.

Inside you'll find aluminium sill plates with a V12 logo, a leather M-branded steering wheel with gearshift paddles, new pedals and bigger dials to accommodate higher speeds (up to 205mph, despite the 155mph electronic limit).

Other equipment includes LED headlights, keyless entry, electric seats front and rear, gesture controls and leather trim throughout the cabin. Plus, there are sun blinds in the back, Alcantara headlining and the latest BMW infotainment system. 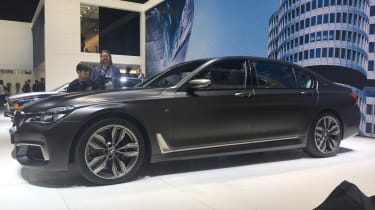 You can also buy your M760Li in Excellence trim, which removes most of the sporty styling additions and uses more subtle-looking wheels and bumpers. The exhaust is toned down, too, to make sure it's less intrusive if you put your foot down. You also get deep-pile carpet and extra wood trim inside to boost the comfort factor.

The V12 engine claims 22.4mpg and 294g/km CO2 emissions, so it's not exactly going to be cheap to run, but it's sure to be pretty expensive to buy as well. There are no official pricing details yet, but when it launches at the end of 2016 we expect it to cost somewhere close to the Mercedes-AMG S 63's £120,000 price tag.

Elsewhere, BMW showed the 740e plug-in hybrid next to the M760Li. It features the same powertrain as the existing X5 xDrive40e, making use of a 254bhp 2.0-litre four-cylinder petrol engine mated to a powerful electric motor. Combined power stands at 322bhp, while BMW says it'll return 134.5mpg and emit just 49g/km of CO2 – managing 25 miles on electric power alone. BMW's xDrive all-wheel drive is an option, but pushes CO2 emissions to 53g/km.

Read all our coverage of the Geneva Motor Show here...