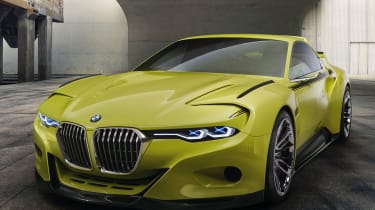 BMW has taken the wraps off a sensational new concept at the exclusive Concorso d’Eleganza Villa d’Este show in Italy. Called the 3.0 CSL Hommage, it’s a spiritual successor and design tribute to the iconic 3.0 CSL from the seventies.

The CSL Hommage – CSL stands for coupé, sport, lightweight – makes use of the sophisticated modern day technology and materials BMW has begun to use in its production cars from the i Division. Crafted from lightweight carbon fibre, the 3.0 CSL Hommage is believed to be based on the M4 and uses a six-cylinder in-line engine with eBoost.

• Stunning classics up for auction at Villa Erba 2015

Despite the advancements in technology, the Hommage sticks to the recipe of the original CSL. The interior has been stripped back to the bare essentials, with the focus on reducing overall weight. The seventies model’s aluminium bonnet, boot and wings have made way for carbon fibre versions. 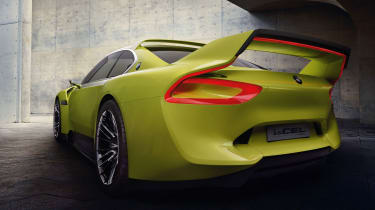 The design of the Hommage has been heavily influenced by aerodynamics, but retains enough classic styling cues from the legendary racer with which it shares a name. BMW’s trademark kidney grille dominates the front end, and adopts the more upright styling from BMWs of old. Slender laser and LED headlights merge with the pronounced grille, with the stylised X-graphic a nod to the headlamp stickers used on BMW’s long-distance race cars.

BMW claims the Hommage is one of the lowest cars it has ever produced, a result of the carbon fibre front splitter closing the gap between the road and the front end. To further reduce drag and increase aerodynamic efficiency, traditional wing mirrors have been replaced by cameras. 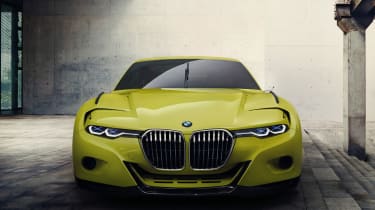 Viewed in profile, the fixed rear spoiler extends beyond the C-pillar, where there’s a BMW logo on each side, in keeping with the original 3.0 CSL. Black 21-inch alloy wheels fit snuggly into the flared arches, while the LED tail-lights continue seamlessly into the tall rear wing.

The interior is stripped of all luxuries, and puts its lightweight design on show. Where the cabin of the old 3.0 CSL was trimmed in wood, the Hommage uses only a decorative strip of wood on the instrument panel; the rest is constructed entirely out of carbon fibre. Bucket seats with matching Golf Yellow stitching, as well as the six-point harness and fire extinguisher, hint at the car’s racing pedigree. 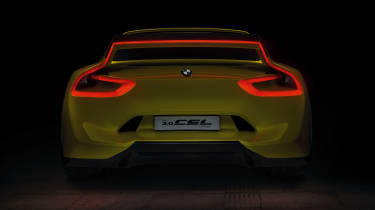 BMW isn’t giving much away in terms of performance, but did confirm the Hommage is powered by a six-cylinder in-line engine which also features eBoost technology. The brand is staying tight lipped as to what the system actually is, but it’s no secret BMW has been experimenting with performance upgrades, as seen with the water injection system used on the M4 GTS Coupe to be used as a safety car in top-line MotoGP bike racing. 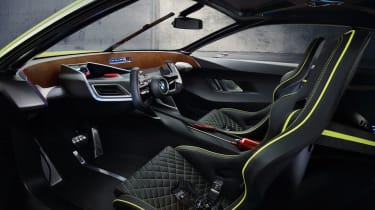 Although the Hommage vehicles BMW has produced for the Concorso d’Eleganza over the years don’t normally make it to production, the company said: “Our Hommage cars not only demonstrate how proud we are of our heritage, but also how important the past can be in determining the future.”

This could point towards the re-emergence of the CSL name in BMW’s current product range, which could first find its way on to a more focused version of the M4 Coupe in the near future.

What do you think of the BMW 3.0 CSL Hommage concept? Let us know in the comments below...