BMW has waded in with a revised X1, but can it beat the Audi Q3? We put the pair head-to-head... 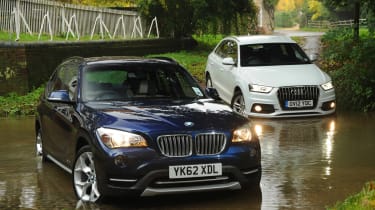 New compact SUV and crossover models have streamed on to the market over the past couple of years, leaving the BMW X1 looking a little out of date. So the company has made a series of revisions in an attempt to bring the car back into contention.

The changes aren’t exactly radical, though. There’s now the option of an eight-speed automatic gearbox in place of the old six-speeder, while two new trim levels – xLine and Sport – join the line-up. All X1s also get subtle styling alterations and a slightly revised interior.

There’s a choice of 18d, 20d and 25d diesel engines, with all but the flagship 25d offered in either two or four-wheel drive.

We test the 141bhp xDrive 18d 4x4 in xLine trim. It faces the classy and desirable Audi Q3. The 138bhp 2.0-litre TDI quattro version in flagship S line spec costs £1,110 more than the BMW. The question is whether the revised X1 can topple one of our current class favourites.

BMW has been on a roll of late. The 1, 3 and 5 Series are our current favourites in their respective sectors, while the new 3 Series Touring recently took victory in its first test. Unfortunately, minor updates to the X1 haven’t done enough to change our opinion that it’s the weakest car in the range.

Its dated cabin, awkward looks and heavy steering all disappoint. The X1’s flaws are even more obvious when pitched against the Audi Q3, which is a well rounded and desirable package.

It isn’t exciting and it’s far from revolutionary, but a first-rate cabin and smart looks mean it feels just like a scaled-down Audi Q5, while the driving experience strikes a careful balance between comfort and handling. It also has a bigger boot and more passenger space than the BMW.

Still, the X1 isn’t all bad. The 18d engine is refined, punchy and clean, while taut body control and secure grip mean that, aside from the heavy steering at low speeds, the BMW is pretty good to drive.

Also, the new xLine trim is relatively well equipped and it’s cheaper to buy than the S line Q3. The pair returned identical fuel consumption, but the BMW is cleaner. Yet the Audi has better residuals, and is also easier to live with, roomier and more desirable than the X1. It’s a clear winner.