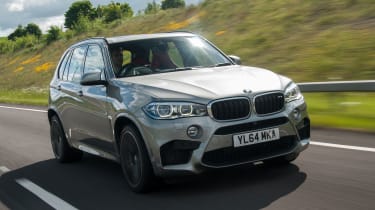 In just about every way, the X5 M is an impressive feat of engineering. From its blistering straight-line acceleration and sharp handling to its pumped-up styling, the BMW is for those who like their cars large, fast and loud. However, it’s unjustifiably almost twice as expensive than the X5 40d M Sport, and if you’re after adrenaline-pumping thrills, then an out-and-out sports car will do a better job. Still, this performance SUV stacks up well against its rivals.

In a game of Top Trumps – and for buyers of SUVs for whom supercar engine stats are important – the BMW X5 M puts clear daylight between itself and its rivals. To demonstrate, let’s take its two most obvious rivals as yardsticks – the Porsche Cayenne Turbo and Range Rover Sport SVR.

The X5 M’s power translates to an unhinged 0-62mph time of 4.2 seconds – three and five-tenths faster than the Cayenne and SVR respectively. And although its 155mph top speed lags behind both, we wouldn’t bet against it winning here, too, if the electronic limiter was removed. There’s no arguing with the numbers, then, but is this a true M car from behind the wheel? 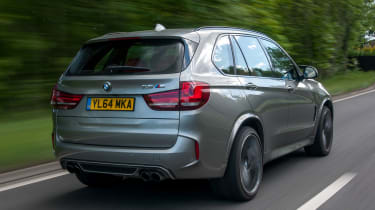 BMW has opted for an eight-speed torque-converter auto, rather than the M dual-clutch box in the M3/M4, and it’s a wise choice. Flatten the throttle, and it drops a couple of ratios before you explode down the road in a whirlwind of acceleration and noise you don’t expect from a 2.3-tonne SUV.

Use the steering wheel-mounted paddles and wind the windows down, and you can enjoy snarling rasps from the quad exhausts on upshifts. Separate buttons for the standard Adaptive M suspension, steering weight, gearbox ferocity and throttle response let you tailor the car’s behaviour; and with everything dialled down, it’s perfectly comfortable and civilised – even with the first damper setting and 10mm lower springs than the standard car. However, the problem is, even the small prods of the throttle cause it to leap forward. 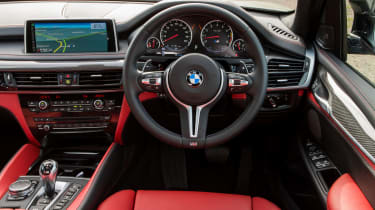 In corners, the standard X5 already does a physics-defying job of hiding its mass, and the M version is even better. There’s zero slack in the steering, while a quicker ratio makes turn-in instant. From there, the car stays flat and grips hard.

But it all begs the question: if you want to be pinned to your seat and feel adrenaline pump through your veins, why buy an SUV? Sure, the X5 M will up your pulse, but not as much as a true sports car.