The Cadillac CT6 takes aim at the BMW 7 Series and Mercedes S-Class, but is no real match for its luxury German rivals 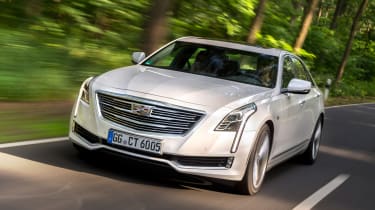 The CT6 isn’t a bad car, but it will be very hard to justify buying one in the UK. Its price and left-hand drive only availability are the big drawbacks. There’s loads of tech on board and it’s good to drive, but it’s not massively spacious inside and the thirsty petrol engine is paired with a frustrating automatic gearbox. You’ll be far better off with the Mercedes.

The CT6 is Cadillac’s attempt at taking on the German luxury elite made up of the BMW 7 Series and Mercedes S-Class.

Proportionally, it’s a little bigger than an E-Class, but smaller than an S-Class – yet as a top-spec Platinum model, the only version available in the UK, it’s priced to match its larger rival.

It certainly feels just as big as an S-Class from behind the wheel, feeling wide and spacious from the driver’s seat. But if you hop in the back, it feels more like an E-Class – there’s a sufficient amount of legroom, but it’s nowhere near as spacious as the flagship Mercedes. 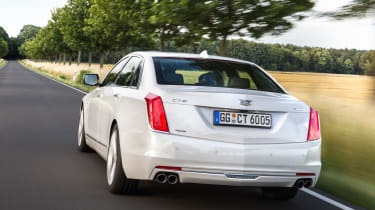 In the UK, where the CT6 is only available from one dealer, in left-hand drive, it needs to be very special from the driver’s seat indeed to have any appeal. You might expect a Cadillac to roll a lot in corners, but the CT6 feels composed while at the same time preserving the smooth ride you’d also expect from the US brand. However it simply can’t touch the S-Class on that front.

On a performance level, the powerful but smooth 3.0-litre V6 develops 411bhp which is enough to cover 0-62mph in 5.7 seconds. There’s a nice howl from the exhaust as you blast through the rev range, and the in-gear shove is more than enough for a quick overtake thanks to 555Nm of torque.

Unfortunately the rest of the package lets the CT6 down. The eight-speed automatic gearbox is dim-witted and frustrating to use, in both manual and automatic modes, and the V6 petrol engine isn’t exactly economical, managing just 28.8mpg on average.

It’s absolutely full of kit though, with all four seats getting a massage function as well as full electric adjustment, heating and cooling. There’s a huge digital display that’s fully configurable behind the wheel, plus a high-res display screen with sat-nav, full smartphone connectivity and a premium Bose stereo. There are built-in screens and a DVD player for rear-seat passengers as well. 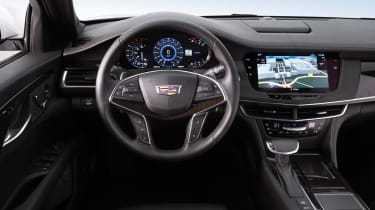 There’s a reversing camera too, plus a camera that can be used in place of the rear-view mirror (unfortunately it’s uncomfortable to look at while driving) and a forward-facing night-vision camera.

Despite the kit, the interior quality can’t compete with its rivals, with cheap-looking carpets and plastics being unacceptable in a car at this price point. The seats are comfortable and the cabin is quiet, but it’s not as pretty as the plush S-Class.

The boot is also smaller than that of a BMW 5 Series, let alone a 7 Series, with just 433 litres in the back. With such shortcomings and such accomplished opposition to compete against, buyers will come away expecting more from a car like the CT6.