If you can fly a plane, you can drive a car, surely? We find out as the famous Red Arrows pilots drive Aston Martins

Founded in 1965, the Red Arrows are famous across the globe for their precision aerobatic displays that wow air show-goers throughout the summer months.

The iconic red, white and blue Hawk T1 jets fly in an unmistakable diamond formation, and at speeds of up to 600mph, just 300ft above the ground.

• Flying cars of the future

As part of a team of 10 highly skilled personnel, each pilot has completed over 1,500 flying hours at the helm of frontline aircraft such as the Tornado and Typhoon. They are assessed and examined during a thorough week-long selection process, and usually spend three years with the team – holding the same position throughout their stay. 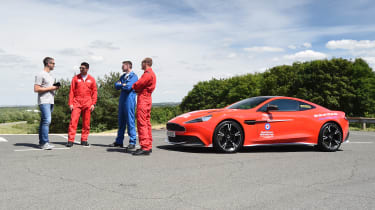 But does their meticulous attention to detail, fastidious training regime and constant search for perfection help or hinder them behind the wheel of a car? We joined the squad at Millbrook Proving Ground in Bedfordshire to test their mettle in a range of brand new Aston Martins.

The day begins with a safety briefing at Aston’s on-site Performance Driving centre – a location that usually offers customers a safe test bed to explore their car’s capabilities on closed roads. It’s a challenging course of tight hairpins, blind crests and long straights, with specially manufactured road imperfections thrown in for good measure.

Millbrook is used industry-wide for manufacturers to complete new model testing and final shakedowns. But today it’s been sectioned off for the pilots – along with a range of Aston Martins to try. The line-up includes the recent Vanquish S Red Arrows edition, as well as the latest DB11 and soon-to-be-replaced Vantage V12.

There are many parallels to be drawn between Aston and the Red Arrows. Both are British icons, both are built for performance and both are recognised all over the world. The cars and planes represent the best in British engineering, and both are light, nimble and very fast. 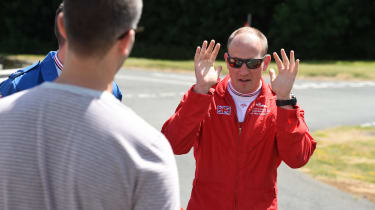 First out on track is squadron leader David Montenegro – also known as Red 1. When flying, he sits at the front of the diamond, and is in his final year with the Arrows. He’s a qualified instructor on the Hawk T1 jet and has served in several frontline combats since joining the RAF in 1999.

“The Hawk is a really agile aircraft,” he told us. “It’s very fast and you can pull a lot of Gs. But getting into an Aston Martin and sitting there at 130mph on a track was a sensory overload. The ground rush is exceptional.

“It didn’t feel as if it was going too fast. You know there’s more in it. It was tempting to push harder. It was fantastic.”

These are comments echoed by Flight Lieutenant Dan Lowes (Red 3), a first year Red Arrows pilot who also serves as a qualified weapons instructor. He has conducted Quick Reaction Alert in the UK and the Falkland Islands, too – a 24-hour-a-day post that maintains air safety using Eurofighter Typhoon jets.

The Arrows are self-confessed adrenaline junkies, but they’re surprisingly averse to risk. Just like they would in their day job, each pilot’s approach is careful and logical.The day’s course takes in Millbrook’s undulating Hill Route, which despite looking like a normal road, is a challenging one-way test track totally devoid of speed limits or traffic restrictions. It’s an unforgiving course with no run-off areas, rumble strips or tyre walls, and one that will happily catch you out in a moment of lapsed concentration.

“When you fly a Hawk you’re travelling at around seven miles per minute,” said Montenegro. “You always think ahead. Anticipating the next event is key to being a good driver, too.” But that’s not for Red 1 to judge, nor his team-mates, who constantly rib one another as they return from their high-speed runs. After a few outings, we had a word with David Hornsey, Aston Martin’s Performance Driving Consultant, to see how the Arrows got on.

“What was most refreshing was being able to coach people with a degree of mechanical sympathy,” Hornsey said. “What’s more, they’re used to learning stuff, and they’re accustomed to training. You can say something and straight away they’re on top of it. 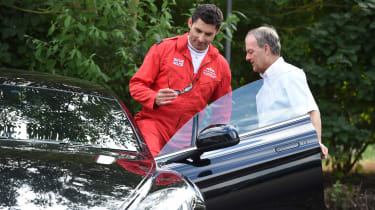 “Although it’s a different skill set – they’ve got a steering wheel and pedals rather than a joystick and rudders – it’s still a mechanical interaction. They’re very brave, though. Speed certainly isn’t an issue.”

On the subject of speed, another aspect of the day’s tests includes a run around Millbrook’s high-speed bowl. A two-mile banked loop that circles the complex facility, it allows the team to test the

Aston Martins flat out – at speeds of more than 150mph. “This was really enjoyable,” Montenegro said. “You had to learn how to manage the throttle, how to let the car gain speed and travel from lane to lane. It’s like a flying lesson.”

After the pilots are done, it’s time for a debrief. The Arrows are particularly good at reflecting on their performance, as doing so ensures constant perfection in their relentlessly high-tempo shows and displays. It’s an important part of their relationship with the engineers (all of whom wear blue overalls), too, who rely on the pilots’ intelligence to pre-empt problems and issues that may arise during flying. This allows the RAF to continue flying 30-year-old planes with the utmost precision, accuracy and speed. 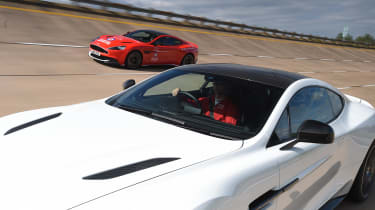 So is there anything they found particularly difficult? Or something that perhaps surprised them while at the wheel of Aston’s highest-performing supercars?

“Braking technique was one of the hardest things for us,” Montenegro said. “Acceleration is great and cornering is incredible, but the technique of being able to put your foot as hard as you can on the brake – and letting the technology stop that inertia – was very impressive indeed.

“Unlike stopping a 5.5-tonne jet, where you have to nurture it from high speeds and can’t be too aggressive when you land, here they’re designed to be really punished.”

You’d expect these nitrous-fuelled thrill seekers to drive supercars and hot hatches. But the amount of time the Red Arrows spend away from home means they’ve very little chance to enjoy their time behind the wheel. As a result, the pilots’ own cars are largely run-of-the-mill saloons and hatchbacks – ranging from diesel VW Golfs and Honda Civics, to Montenegro’s battered Audi A3. In fact, there’s not a sports car in sight. Maybe that will change now they’ve had a taste of what Aston Martin has to offer...

Click here for a chance to win an Aston Martin Vanquish S Red Arrows. All proceeds will go to the RAF Benevolent Fund.