With interest in electric cars growing, Steve Fowler explains how Polestar and Dyson can succeed 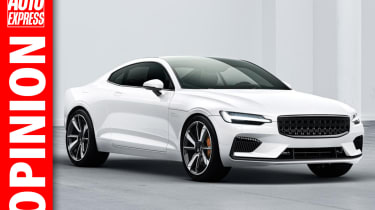 How long do you think it takes to launch a new car company? In the case of Polestar – the new electrified performance brand that sits within the Volvo Car Group – it’s just two years.

Back in 2015 on a frozen test track in Sweden, Volvo CEO Håkan Samuelsson, while reviewing an early production version of the Volvo Concept Coupe, decided that it shouldn’t wear a Volvo badge – but something different. And Polestar was born.

And last week in Shanghai, the Polestar 1 was launched to the world. That all goes some way to explaining why the 1 looks so much like a Volvo – because that’s what it was originally meant to be. But it’s also an important statement for what’s to come from a standalone Polestar.

As we reveal in this week’s issue of Auto Express, in 2019 we’ll see an all-electric Polestar saloon to rival Tesla’s Model 3. Then, in 2020, a low-slung all-electric Polestar SUV will be unveiled. And those cars, we’re promised, will better define what a Polestar will look like – and that’s not like a Volvo.

There’s plenty of work to be done before then as Polestar’s Brit COO, Jonathan Goodman, revealed. The pace will be frenetic, but with the tech involved it’s all achievable. Construction hasn’t even started yet on the Chinese factory that’ll produce the beautiful, hi-tech Polestar 1 from the start of 2019.

It’s the likes of Polestar and even Dyson that are really set to shake up the whole car market with innovative new models and different ways to buy them. And the timing for these predominantly electric brands really couldn’t be better.

The interest is already there, as the number of people viewing our EV stories online shows. They might not be ready to buy just yet, but I’m sure that time will come much sooner than people think.

Are you keeping an eye on the electric car market? If you would consider buying an EV, tell us why below.