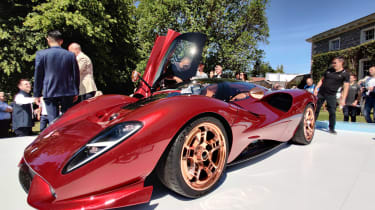 The De Tomaso P72 GT – built on the same platform as the V12-engined Apollo IE – pays homage to the wild P70 racing car of the 1960s. It has been designed by the IE’s designer Jowyn Wong and offers a modern take on the original car's looks.

Formerly only known by its development codename #DTPROJECTP, the new De Tomaso spearheads efforts to revive the historic Italian brand. The De Tomaso P72 uses the same all-carbon chassis as the Apollo IE but wraps it in flowing bodywork that’s reminiscent of 1960s racing prototypes. And unlike the original P70, the P72 will be road legal.

It’s not yet clear exactly what will power the P72; although co-founder of Wyn Design, the company that styled the car, Jakub Jodlowski confirmed to Auto Express that there woulld be V12 and V8 options. From that it would seem that the Apollo IE’s bespoke 6.3-litre naturally aspirated V12 is a likely candidate. De Tomaso has confirmed that the car will feature a manual transmission – though the model on display at Goodwood featured a sequential ‘box. 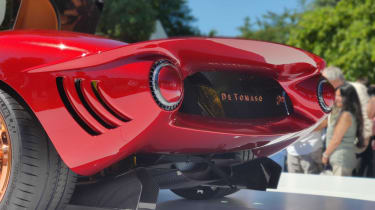 Just 72 examples of the P72 are slated for production, with an approximate price of 750,000 Euro. It’ll rub shoulders with the forthcoming Ferrari SF90 Stradale, as well as lower-volume rivals like the Pagani Huayra. The P72 will be sold through Joe Macari Performance Cars in London; prospective owners can put down a ‘soft deposit’ to secure their car now.

What do you think of the new De Tomaso? Let us know in the comments...