Best new cars for under £200 per month

There's no shortage of new cars that cost less than £200 per month, but these are the best on the market right now 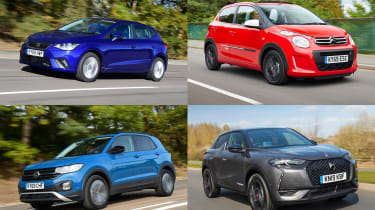 Car finance deals have brought nice shiny new cars within the reach of millions of people, meaning you can drive away in a vareity of cars for less than £200 per month. To save you working your way through hundreds of manufacturer deals, we've rounded-up a selection of the best, including the SEAT Ibiza and Volkswagen T-Cross.

As car manufacturers are in the business of selling cars, you should always be able to find a deal which suits your needs, whether that be for a two-seater sports car, hot hatch or SUV. There is of course a skill to negotiating, especially when it comes to working out the initial deposit, monthly repayment rate and optional final payment, but provided you are willing to haggle, most dealers should knock some money off for you. As a wise man once said, ‘he who dares wins Rodney’.

Those wanting low monthly repayments will need to be prepared to put more into the initial deposit, but be careful not to over stretch your finances as it is all too easy to get swept away and sign for a car you can’t necessarily afford. Another thing to note is dealer interest rates, which affect your expenditure further down the line.

You also need to consider that at the end of your PCP finance plan, the vehicle won’t belong to you. You’ll have the choice of buying it outright for a fixed sum agreed in advance with the dealer, but if you don’t want it then you’ll simply hand back the keys. So think carefully about whether you’re using the deal to take full ownership of the car, or whether you just want access to it temporarily before moving on to a newer model.

Best new cars for under £200 per month 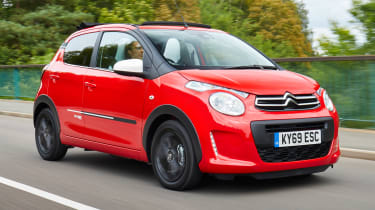 With its distinctive styling, the C1 represents the middle ground between the extrovert Aygo and sober 108. Unlike those two models, the C1 is offered as a three-door in all of its trims; the others restrict the three-door to lower specs. The exception is the Airscape model, because the full-length sunroof is only available with the five-door body.

As in the other two, there’s a good amount of space up front, but it’s fairly cramped in the back, although that’s to be expected in the city car class. Mid-spec Feel models balance kit and cost best, with a seven-inch touchscreen, DAB, air-con and Apple CarPlay and Android Auto. Plus, Citroen is currently offering one year’s free insurance for drivers between 19-75 on all but the entry-level trim. 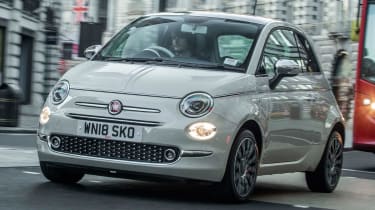 More than a decade after its launch, the Fiat 500 remains one of the most popular and stylish models in the city car class.

Buyers love its cheeky looks and personalisation, while its compact dimensions make it a breeze to drive and park. A facelift in 2016 introduced a new infotainment system, but the 500’s underlying flaws remain. Its build quality is poor and the two engines are either breathless or uneconomical. 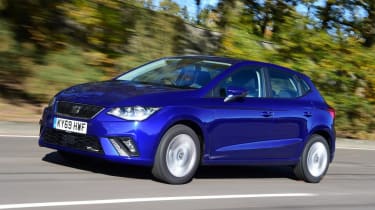 Don’t think that the Ibiza is all about style at the expense of space; it actually has more room than most cars in this class.

It also comes crammed with tech, with Android Auto and Apple CarPlay across the range, although you’ll need to pick SE Technology trim or above to get an eight-inch touchscreen. While interior space impresses – the boot is larger than the Polo’s, for example – there are some scratchy plastics. This is one of the few areas where it trails the Polo.

The engine range more or less matches that of the Polo and Skoda Fabia, and the 95PS 1.0 TSI is frugal, but strong enough to exploit the Ibiza’s entertaining chassis. 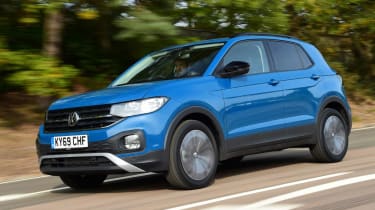 Like many cars within the VW Group, the T-Cross SUV shares a platform with its SEAT and Skoda siblings – in this case the Arona and Kamiq respectively.

Where the SEAT boasts sharp steering and the Skoda prioritises practicality, the VW sits somewhere in between. Its badge will attract plenty of buyers, but there’s substance to go with it; the T-Cross boasts an intuitive infotainment system and a spacious interior.

The range of engines is somewhat limited, but the small-capacity turbo petrol pulls the car along with reasonable efficiency and should suit most small SUV buyers down to the ground. 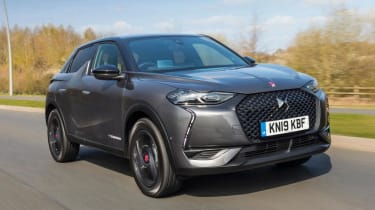 The DS 3 Crossback is something of an oddball choice, but you can't argue with some of the PCP deals that DS is offering. You can pick up a Elegance model with PSA's punchy 1.0-litre 3-cylinder engine for less than £200 per month, plus it comes with a decent £1,200 deposit contribution.

While some of the DS 3 Crossback's features are best described as quirky, it's still a premium crossover available for non-premium prices. Its exclusivity is also be a major selling point.