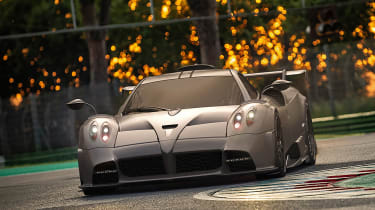 Pagani has revealed a new version of the Huayra supercar, which is track-bred and limited run.

Called the Huayra Imola - after the circuit where it was developed - the new car features a host of upgrades including a more powerful version of the Mercedes-sourced V12 found in the BC Roadster.

The Huayra’s twin-turbocharged, 7.0-litre V12 has been tuned to 815bhp and 1100Nm of torque in the Imola - an increase of 24bhp and 50Nm over the BC Roadster. Power is sent to the rear wheels through the same seven-speed, paddle shift gearbox.

The visual changes are the most prominent alterations to the Imola, as the car has received a cluster of new aerodynamic appendages. There’s a new large fixed rear wing, roof scoop, side skirts, vented wings and redesigned front and rear bumpers. The active aerodynamics from the Huayra remain and coupled to the larger diffuser and spoilers, the Imola creates more downforce than the regular car.

With the increase of power, the Imola’s suspension has been tweaked with the addition of electronically controlled active shock-absorbers. Weight has been shed over the BC Roadster with a new paint which loses 5kg. Overall, the Imola weighs in at 1246kgs. 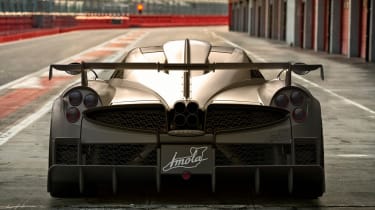 Despite the links with track driving, the Imola has also been designed with road-use in mind. The company’s founder, Horacio Pagani noted, ‘we could have reduced the ground clearance to increase downforce by taking advantage of the vehicle’s flat bottom. But don’t forget, the public roads are very uneven and can lead to the loss of several hundred kilograms of downforce in just a few instants.’

If you’re interested, you’re already too late. With only five examples made, unsurprisingly the Huayra Imola has already sold out - each one priced in excess of £4.1 million.

What would be your track day weapon of choice? Let us know in the comments below...