Filling up on history: we visit the site of the world's first fuel stop 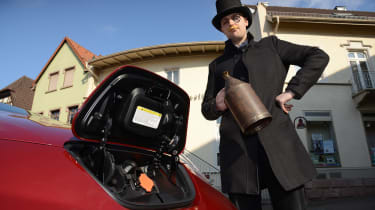 Thousands of cars and lorries thunder along this stretch of road in south west Germany every day, yet few drivers will notice the small brown heritage signs lining it. On them are four simple words: Bertha Benz Memorial Route.

It might not seem much, but these words should carry real weight for those travelling along the route, as without the trailblazing wife of car maker Karl Benz, modern-day motorists might have a tougher journey to work.

• UK fuel prices on the up

That’s because 39-year-old Bertha took her husband’s new creation – the Motorwagen – along with her two teenage children to visit her mother and a newly born niece 70 miles away. It was during this trip that Bertha made the first ever fuel stop at the Stadt-Apotheke – or town pharmacy – in Wiesloch, Baden-Wurttemburg. 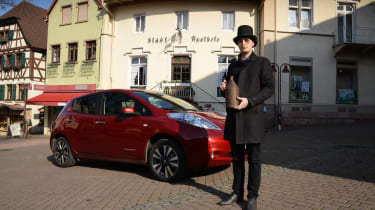 That car – the Benz Patent Motorwagen – and the subsequent journey kick-started the automotive revolution, with the three-wheeler celebrating its 130th birthday in January. It was powered by a rear-mounted 0-95-litre internal combustion engine good for 0.6bhp and a top speed of just 10mph. Not impressive by today’s standards,  but for Bertha it meant the mobility to visit her family.

Bertha completed the 120-mile round trip in 1888, and by getting back in one piece, she proved the car’s feasibility as a method of long-distance transport. A year later, Benz showed off his Patent Motorwagen at the 1889 World’s Fair in Paris, and, as they say, the rest is history. 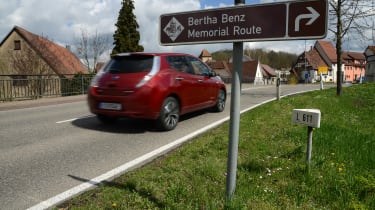 While many drivers will have forgotten about this momentous and historic road trip, Auto Express hasn’t. And to mark the car’s 130th birthday, we embarked on this route, albeit this time in something a little more modern yet, in some cases, equally groundbreaking.

We got behind the wheel of Nissan’s latest Leaf, which has a claimed all-electric range of 155 miles – enough to complete the Bertha Benz Memorial Route without stopping.

Of course, many of the roads we’d be driving on didn’t exist at the time, and Bertha would have had to make do with bumpy field tracks. Still, we’d keep to the route as strictly as possible – helpfully signposted with those brown heritage posts – which meant shunning the fast Autobahns in favour of scenic countryside roads and tight town streets. 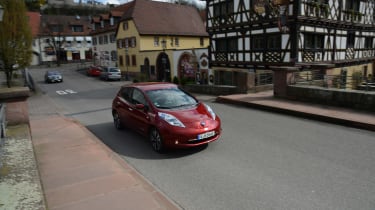 While we weren’t staying in the exact house of the Benz family, where better to start our route than at the Dr. Karl Benz Automuseum? Armed with a set of printed maps, our smartphones and the Leaf’s built-in sat-nav, we set off on our replica voyage.

The route strikes out from Mannheim across to Ladenburg and then onto the famous university town of Heidelberg. Bertha took the dead straight Roman road, but today that’s closed for public traffic so we head down a road that runs alongside and follows the Rhine valley. The old route was placed higher up in the hills to prevent flooding – this was before the days of flood defences. 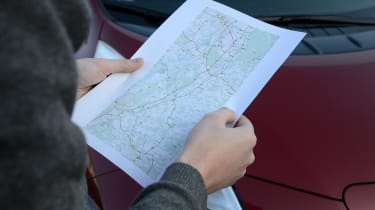 After Heidelberg, the route drops south and we arrive at Wiesloch – the site of the first ever refuelling. It was here, outside the Stadt-Apotheke, where Bertha filled up her Model 3 Motorwagen to allow her to continue on her way.

• The car of the future? Shell's Project M

Our arrival is slightly less dramatic, but nonetheless interesting for locals, who are keen to see what an electric car is doing in the pedestrian village centre. We meet owner Adolf Suchy, who has restored the original room to its 1880’s look, and his passion for the story is remarkable. He tells us: ‘Interest is growing, but there’s no support from the council to do this, just our motivation. It’s worthwhile developing this and collecting all the info.’

‘Most people know of her visit, yet the interest on he detailed history is more intellectual; unfortunately we cannot show you a lot, we have to tell you a lot.’ 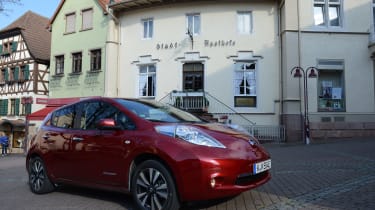 And so he does. The Ligroin fuel used was a type of Benzine that normally specialises in the removal of stains and oil, as the low boiling point was ideal for its use in a carburettor. And it cost just 30 pfennigs a litre – equivalent to around a single penny in today’s UK currency. Around 15 to 20 litres were needed to brim the tank, and as fuel consumption was relatively low, this would last a while.

The pharmacist at the time, Willy Ockel, became known as the first ever filling station attendant, but ironically had to switch the Pharmacy from the original room to living quarters. That’s because the road outside became too noisy with traffic, as following the Benz’s success, Stadt-Apotheke found itself on the main route from Karlsruhe to Heidelberg. Adolf jokes: ‘It’s the ghosts of pharmacists past.’ The street outside is now pedestrianised.

The Wiesloch pitstop wasn’t the end of the journey by any means for Bertha, as she and her family headed on to Pforzheim and battled defective ignition cables,  clogged fuel pipes and cooling water shortages. A shoemaker in Bauschlott even repaired the battered leather brake pads. 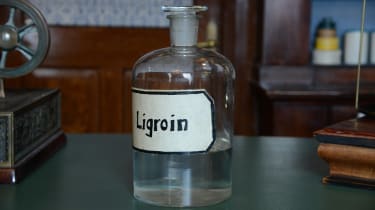 Fortunately, none of these issues plagues our Leaf as we head off from Wiesloch. In fact, the range is constantly improving thanks to some economical driving; we even manage to rack up a whole row of ‘eco trees’ on the dash.

After heading down to Pforzheim, it’s back up via Bruchsal – the crossover point of the Bertha Benz Memorial Route – and the biggest producer of asparagus anywhere in Germany. It’s home to a medieval-style high-security prison used to house terrorists in the 1900s.

It was at Bruchsal on the return leg that Bertha took the road via Bretten to avoid going down the steep hills she’d driven up previously. Just like the route there, it features a Roman-built road that’s straight for several miles through a forest. It’s open to the public and is truly a sight to behold.

The return journey also takes us past the graveyard of Josefine Benz – Karl’s mother, buried in 1870 – and runs past the Hockenheim circuit, although during Bertha’s day, the track was still some 50 years away from opening.

We meander through several more small German villages for the rest of the journey, before looping back around to our start point in Mannheim. It’s been a full day of driving, but it’s fair to say the Nissan Leaf has been a much more comfortable, quiet and reliable option than the original Benz Patent Motorwagen Model 3 that Bertha used. 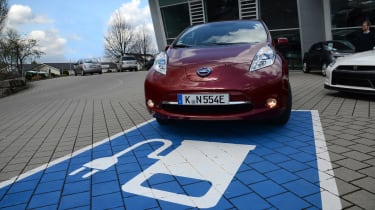 The range of the Leaf saw our journey mark an important point in automotive history, too, and an impressive step for electric models. No longer are affordable EVs only confined to cities. And, as we experienced later in the day to make sure we got back to the airport, charging isn’t quite the hindrance it once was thanks to rapid chargers.

So, having followed the brown heritage signs to their journey’s end, it strikes us how much as changed since Bertha Benz did the same more than a century ago. You just wonder where we’ll be in another 130 years’ time…

The rise and fall of the filling station

Wiesloch might have been the site of the first fuel stop, but it certainly wasn’t the last. In the UK, it took 25 years of motoring before petrol stations became readily available. The first was in Aldermaston, Berkshire, and was opened by the Automobile Association (AA) in November 1919 – a year after the conclusion of World War One. By 1923, 7,000 pumps were in use.

Over the rest of the 1900s, petrol – and latterly diesel – boomed, with filling stations popping up all over the place. However, there has been a marked shift in recent years, and fuel pumps are now on the decline. 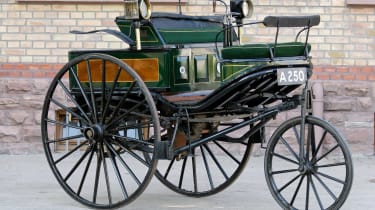 The oldest remaining site – Bloomsbury Service Station in Central London – closed in 2008 having first opened in 1926. Less than a mile away, one of the last petrol stations within the capital’s Congestion Charging Zone, under the BT Tower, shut its doors a little under three years ago.

Conversely, the number of electric charging points is on the up, and there are now around 60,000 points – more than six times the number of petrol stations – and that’s set to grow, too. Nissan believes the car itself will be the fuel station of the future, as wireless charging becomes a reality.