How to get a job as a car MoT tester

We join trainers at the RMI Academy of Automotive Skills to see what it takes to issue an annual MoT, and find out how the test has changed 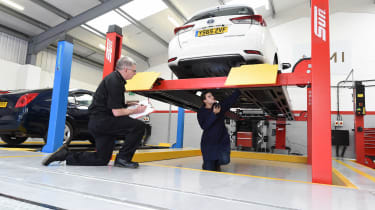 Fancy becoming a car mechanic? You might think it’s all about big engine refits and restoring beautiful classics, but in reality, the majority of garage workers spend most of their time ensuring cars are still roadworthy and safe.

From checking seatbelts to testing braking efficiency, the legally required MoT (Ministry of Transport) test often doesn’t need a mechanic to even pick up a spanner. That doesn’t mean it’s easy, though, and it’s far less simple than it used to be. To find out exactly how involved an MoT is and what we’d have to do to become a trained mechanic, we joined the team at the newly formed RMI Academy of Automotive skills in Southam, Warwickshire. 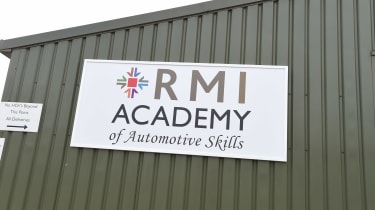 The Academy is run by the Retail Motor Industry Federation (RMI) and is one of many due to spring up all over England, Wales and northern Ireland to address the increase in vehicle tech that’s changing the MoT.

• How to check your MoT History online

History of the MoT test

First introduced in 1960 under the powers of the 1956 Road Traffic Act, the MoT test was brought about to address an increasing number of poorly maintained pre-war vehicles on UK roads. Initially, it was quite a simple procedure that involved checking just the brakes, lights and steering. It was also known as the ‘10-year test’, as it was only required for vehicles over a decade old. That age gradually fell due to a high failure rate, and by 1967, it was down to the three years we’re familiar with today.

As time passed, the test became more and more stringent, with cars having to meet CO2 emissions regulations and increased safety legislation brought in after Britain joined the EU. Over the past two decades, the massive advances in vehicle technology and the growth of electric and hybrid cars have made an industry testing standard more important than ever. 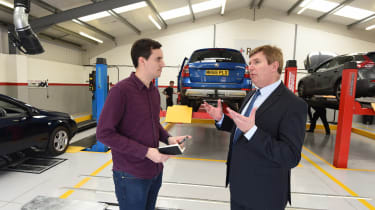 And that’s where the Academy comes in. The tester training facilities are being set up due to the fact the Government’s Driver and Vehicle Standards Agency (DVSA) has ceased its subsidised training scheme to cut costs. RMI director Stuart James sees it as an opportunity to set a new standard with a ‘much more rigorous’ training programme that includes health and written assessments.

Testers also now require top-up training of three hours every year for five years. The courses cost anywhere from just under £300 to over £1,000 depending on levels and membership. Previously, technicians only had to complete five hours of DVSA training every 15 years, most of which was paid for by the Government.

The MoT test in detail

It’s a lot of investment, but the MoT is something nearly everyone who owns a car will have had to go through. Site technician and trainer Archie Fulton showed us a snapshot of what today’s MoT test comprises. There’s no set order of what needs to be assessed first, but most testers will begin by checking the VIN (Vehicle Identification Number) and number plates are present and correct.

Exterior lights will all be examined for condition, colour and brightness, while the headlamp beam is looked at to see if it could dazzle other motorists. The windscreen is given the once over for cracks or chips that could hinder visibility, plus the doors and mirrors are inspected. Even sharp edges on the car’s bodywork can cause it to fail. 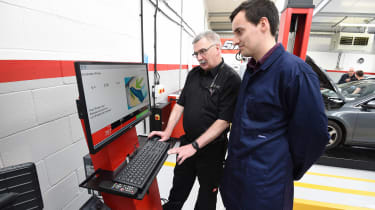 Archie then showed us the emissions testing procedure. How strict this test is depends on the age and type of vehicle; amazingly, cars built before 1979 were judged purely on how much smoke was visible, but the Toyota Auris Hybrid on test when we visited the Academy needed to meet strict Euro 5 regulations.

A probe is inserted into the exhaust to measure the car at idle and under acceleration for toxic particles, such as hydrocarbons and carbon monoxide.

• 15 per cent of MoT verdicts incorrect

After that, it’s driven onto a ‘roller brake tester’ where Archie takes readings on the braking efficiency of each wheel. It’s then jacked several feet into the air to allow us to examine the underbody. As the Auris is a nearly new model, neither Archie nor I can find any issues, but under here everything from the condition of the suspension to chassis rust can be seen clearly under a bright light. The brakes and tyres are also examined by eye to see how much life they have left, while the fuel system is checked for leaks.

Dropping the car back down allows us to complete the final stage of ‘our MoT’ inside the car, including checking for excess play in the steering, ensuring the seatbelts operate safely and making sure the seats themselves are securely in place. While this isn’t even the full list of what needs to be looked over, it’s enough to illustrate just how much the trainees (and qualified mechanics) have to remember for a test that some may complete well over 10 times a day. Plus, this Auris Hybrid flags up a vital issue testers need to be wary of. 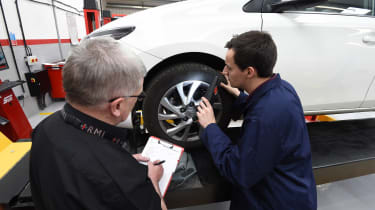 Less than 0.5 per cent of all vehicle technicians in the UK are qualified to work on electric cars. While that means repairs and servicing will prove both difficult and expensive, most fully qualified testers will be able to MoT an EV or hybrid.

‘Most of the parts checked in the MoT test, like the suspension, lights and brakes, will be the same as on a standard car,’ explains Archie. ‘There’s no reason why owners shouldn’t book their hybrid in at a normal garage.’

What testers are being taught is how to be safe working on an EV or hybrid and what to avoid messing with. Archie points out a large stretch of orange plastic tubing buried in the Auris’ underbody: ‘The wiring inside that runs as high as 600V – that’s enough to kill you.’ Wise to leave it well alone, then, just as with the hazardous battery pack and electric motor connections under the bonnet.

Another issue testers need to be aware of is the way a hybrid’s powertrain operates. For example, when running silently on its electric motor, the Auris (like all hybrids) can give the impression of not being switched on. It is therefore very easy for a technician to start working on the car and find the engine suddenly starts up without warning, as the battery runs out of charge. Although these may seem like fairly obvious points, in the cut and thrust of a busy garage, they could mean the difference between life and death.

The future of the MoT

The Government will consult in July on a proposal to push the first MoT back from three to four years from the car’s registration. This has provoked reaction from several corners of the industry, not least from garages. 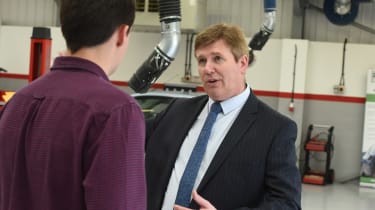 RMI director Stuart James told us: ‘The industry is united against these plans. We are proud that the UK’s road safety record is one of the best in Europe, and removing a year of roadworthiness checks will damage this.’

James cites reports that say up to 22 per cent of cars and vans already fail their first MoT test, and that will mean nearly 500,000 potentially dangerous vehicles on the road for another year before they are checked.

Now read our complete guide to selling your car here...