Best cars in the world for sales in 2016

What are the best cars in the world for sales in first half of 2016? This top 10 list reveals all... 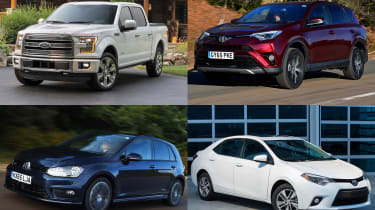 Trying to identify the best car in the world is an extremely tricky task, different people have completely different ideas about what makes a great car and trying to single out one model as the best on sale in the world today is almost impossible. That's why we haven't bothered; instead we looked to the people around the globe who've voted for the best cars in the world with their own hard-earned cash – by buying them.

These cars may not be the fastest, the most luxurious or the most beautiful cars in the word but by definition, they are the best at doing what almost every car is ultimately designed to do - convincing people to buy them. The models in the top 10 list based on data compiled by the Focus2Move Global Mobility Database, reveals the cars with the biggest mainstream appeal to car buyers across the world.

Unsurprisingly, the best-selling car in the world is still the Toyota Corolla, which has been top of the pile for many years now. In fact, it’s such a strong seller that it managed to find its way to 134,000 more people than the Volkswagen Golf in second place. In the UK, the Toyota Auris is as close as we can get to the Corolla, but we aren't quite as enamoured with it as buyers in other markets as it languishes some way down the domestic sales charts.

Ford’s F-Series line of pick-ups still smash the competition in terms of commercial workhorse vehicles, while the Toyota RAV4 and Honda CR-V remain very strong sellers in the SUV market.

Top 10 best cars in the world by sales

Which of the world's favourite cars would you buy? Take part in our poll...