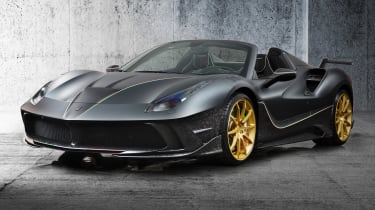 Mansory has uncovered eight new cars at the Geneva Motor Show in a bid to generate maximum attention with its bold styling and exuberant interior design.

Arguably the most striking in the line-up is the 4XX Siracusa Spider, which started life as a Ferrari 488 Spider before undergoing surgery at the hands of the German tuners.

The exterior bodywork has been completely revamped for a more aggressive appearance - a core Mansory theme - while the engine, wheels and cabin have all been revamped as well to deliver gains both in terms of performance and aesthetics. 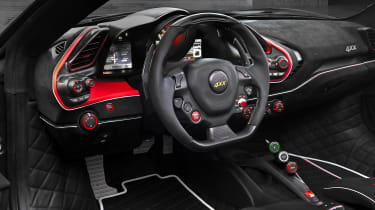 The 3.9-litre V8 in the 4XX has been fitted with a new management system for optimized performance, pulling an extra 118bhp out of the engine for a top figure of 779bhp.

Combined with a tailored exhaust system, the 4XX generates 870Nm of torque at 3,000rpm, and is capable of doing 0-62mph a whole tenth quicker than the original Ferrari version at 2.9 seconds. Unsurprisingly the top speed is up too, climbing from 205mph to 212mph.

And though they’ve all been subjected to significant upheavals on the outside, it’s the inside where Mansory’s brash approach is most evident. 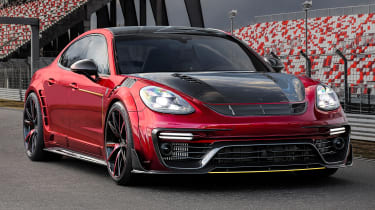 If the Rolls Royce Dawn wasn’t luxurious enough already, the Bavarian tuning outfit promises to make it so with a choice of brushed aluminium, carbon fibre, burl wood or highly polished piano lacquer to grace the dashboard.

Meanwhile in the G500 4x4² the cabin contains “glitter stars”, the colour and intensity of which can be controlled at the touch of a button. The point of this feature isn’t exactly clear, but it sounds fancy and will probably impress your friends.

Mansory hasn’t said too much about prices, which isn’t surprising given that each luxury modification will add a sobering chunk of cash to these already high-prices cars. For us 99 per centers though, at least they’re interesting to look at…

Which of these cars would you buy if you had the money? Make your pick and explain why in the comments section below...