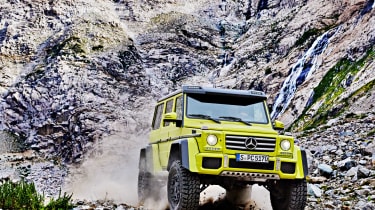 A madcap take on an off-road icon that actually drives better than its lower, less extreme relations on and off-road. The G 500 4x4² may currently be a concept, but it’s as good as ready for production and people are likely to be clamouring to buy it given the response to the even more nuts 6x6.

Mercedes-Benz’s G-Class might be 36 years old, but it’s enjoying its dotage disgracefully. First came the madness of the AMG 6x6, a desert-destined, dune-bashing pick-up, now there’s this, its slightly more conventional four-wheeled relation. Mercedes-Benz is calling this second jacked-up beast the G 500 4x4² and unlike the 6x6, which it sold over 100 of at an eye-watering £370,000 each, it’s still officially a concept. It doesn’t drive like a concept though, the G 500 4x4² feels every bit the finished machine. To create that massive increase in ride height there’s the same portal axle system as the 6x6, giving some 450mm ground clearance and a wading depth of up to a metre. Both those figures are double that of the already rather capable standard G-Class. We’re not sure how many people actually need that ability, but it’s good to know it can. Each of those massive 22-inch wheels has a pair of adaptive dampers too, so the G 500 4x4² offers drivers the choice of Sport or Comfort for its suspension. 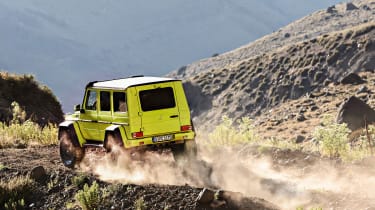 In the wilds there’s nothing that’ll stop it, especially if you option the more extreme off-road tyre package. Do so and it’ll get you anywhere you choose, though it does limit its ability on road - and necessitates the electronic speed limiter cutting in at just 99mph instead of 130mph. add the road tyres, allied to the near 30cm increase in track, and it makes for a surprisingly agile G-Class. This big three-tonne machine corners with ability that’s shocking given its height and mass. The steering takes a while to react, but once it does the G 500 4x4² tucks in with real enthusiasm, actually bettering its conventional relations in the bends, as well as off-road.

• Best 4x4s and SUVs to buy now Unlike its 6x6 relative there’s no AMG involvement with the G 500 4x4², though the engine does share DNA with Merc’s sporting division. Under the near head-high bonnet is an off-road enhanced version of the AMG GT’s 4.0-litre bi-turbo V8, only here it’s got 416bhp and masses of torque. It drives all four wheels through the same three selectable differentials as the regular G-Class, via a seven-speed automatic. Mercedes-Benz isn’t quoting any performance figures yet, but it should reach 62mph in around seven seconds. It sounds magnificent too, thanks to four pipes exiting just in front of the rear wheels. 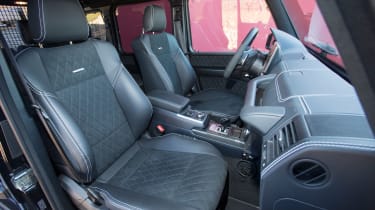 Like the steering that automatic gearbox can be a touch lazy in its response. Even so there’s never any shortage of pace, the G 500 4x4² is limited only by its sheer scale rather than any dynamic or performance shortcomings. The interior retains the same old-world feel of all G-Class models, though is even more lavishly trimmed. It’s as tight for space as ever, the narrow cabin at odds with the cartoonish exterior proportions. Getting in and out is an effort, though the sense of occasion on the move is well worth the climb up. 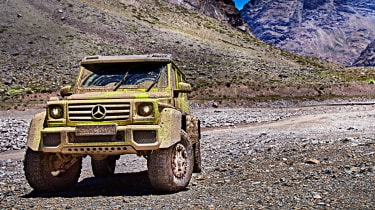 Due to be shown at the Geneva Motor Show, Mercedes-Benz staff say they’ll decide whether to build it depending on the reaction it gets. In fact, it’s already built four G 500 4x4²s for evaluation, so production really is an inevitability, though how many it will build and how much it will cost remains to be seen.