What is Thatcham? Thatcham approved devices and crash tests explained 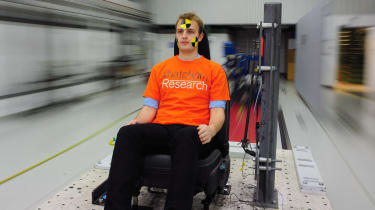 Located in the sunny heart of Berkshire, Thatcham is a quaint little town with a population of close to 26,000 people. As the 60s were swinging to a close, a group of British car insurers got together and founded the Motor Insurance Repair Research Centre in the town and faced with the distinctly non-snappy MIRRC acronym, over time simply it simply became know as ‘Thatcham’.

Flash forward to the late 80’s, and the insurance industry was growing tired of replacing stolen Audi Quattros and Sierra Cosworths, so worked with the government to establish standardised methods of protecting cars from theft. Eventually, Thatcham (the organisation not the town) was approached and tasked with outlining a set of guidelines for car manufacturers, which had the sole purpose of improving the effectiveness and reliability of car security devices. From this, the various different category Thatcham alarms were born.

Since then, the company has continued to grow and to this day remains supported by 30+ insurance companies. It’s primary task is to keep the cost of insurance down by benchmarking the industry standards for security systems, however its remit has grown to include other areas of motoring such as crash testing. 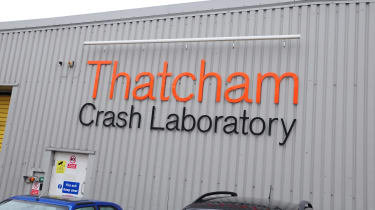 Alarms that carry the Thatcham name are not designed and manufactured by the Berks company, they are subjected to their rigorous testing and if passed are awarded a ‘Thatcham Quality Assurance’ mark and included in one of their seven categories.

The numbering system for the Thatcham approved categories is done to outline the system type, rather than a product's effectiveness, and can be found summarised below:

The main purpose for installing a Thatcham approved alarm is the reduction in insurance cost. However, the cost of buying and fitting the alarm will be significantly more than the reduction to your premium for the everyday driver (top of the line cat 5 alarms can set you back nearly £1000), however the piece of mind is often reason enough for people to pay more to protect their wheels.

Another major string to the Thatcham bow is crashing cars for a living. That’s the job of the experts at Thatcham Research, who pour hours upon hours into making sure our cars are as safe as they can possibly be.

The research facility at Thatcham houses one of only seven Euro NCAP-approved crash test facilities in the world, and Auto Express paid it a visit to get a sneak peek and find out how Thatcham Research is helping the industry.

First up is the crash lab itself. Up to six cars are tested each year for Euro NCAP, with four examples of each model offered up to be sacrificed. The three tests taking place here are a 40 per cent offset front crash at 64kph (39mph), a 50kph (31mph) side crash into a moving barrier and a 29kph (18mph) impact into a static pole.

The tests themselves are closely guarded, but we were been allowed to inspect three recently crashed Audi TTs. The two-door coupe was the first to be tested under new Euro NCAP 2015 regulations, and it scored four stars – one star shy of the maximum five awarded.

Alex Thompson, a crash research engineer and one of only 11 Euro NCAP inspectors in Europe, explains the split-second crash is just a tiny part of the work.

“There’s a huge amount of effort and preparation for a short amount of assessment,” he says. “You have to be extra careful that you have got everything correct – you don’t get a second chance. We take a huge amount of pride in our work and the quality of our output.” 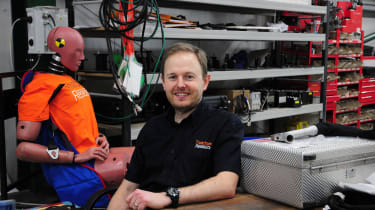 is happy with the final star rating, as Alex reveals: “You’ll see us polishing a car before a crash because it’s got to look as good as it does out of a showroom. The images are as important as the results themselves.”

• Next Government urged to issue guidelines on in-car tech safety

The Audi TT test was the first time that Euro NCAP had used the dummy of a small female driver and a rear seat passenger, too. As cars have become a lot more robust and able to deal with higher impacts, deceleration forces have increased, causing potentially severe injuries to smaller occupants.

The dummies are constantly being updated in the pursuit of the most realistic and accurate representation of a human being, and this doesn’t come cheap.

The Hybrid III dummy – originally developed to represent the 50th percentile male at five foot nine inches and weighing 80kg – costs £100,000. It’s designed to research the effects of frontal impacts, and the range has now expanded to feature a woman, two children and a larger man. 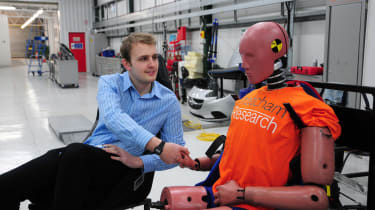 While the Hybrid III is pricey, it pales into insignificance next to the new WorldSID dummy, which will set you back £300,000. It’s been developed to measure rib, spine, and internal organ damage in side collisions, plus spine and rib deceleration and compression of the chest cavity.

With a dummy costing more than a supercar, you’d think it was the most expensive item in the Thatcham crash lab. You’d be wrong. Whiplash testing is also carried out here on car seats, and for this you need a Hyper G sled. There are only two in the world and they cost £1million each.

It can be accelerated to 10mph in just a tenth of a second, thus recreating the forces endured by a driver or passenger in a typical low-speed shunt. It’s extreme stuff, but totally necessary to ensure we’re as safe as we can be in our cars and help reduce the amount of whiplash claims – one of the biggest outlays to insurers.

These insurers are the ones who fund the non-profit Thatcham Research, as the work done by the organisation goes some way to cutting claim costs and ultimately allows insurers to offer drivers cheaper policies. 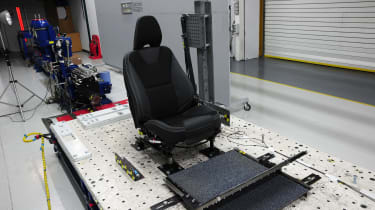 While crash testing for safety is important, putting cars back together is also high on the priority list in Berkshire. Thatcham’s Repair Technology Centre houses an independent bodyshop that develops the best methods and practices to repair cars. It provides instructions for the cheapest and safest processes on the best-selling UK models and will advise a manufacturer if it thinks that they’ve got a repair method wrong. Such is the significance of Thatcham’s work that its repair methods are now being rolled out in Australia.

Andrew Hooker, advanced repair study manager of Thatcham Research, says the team works on around 45 cars per year. During our visit, a tripped-down BMW i3, Mercedes E-Class and Volkswagen Golf were being given the full treatment. He adds: “Cars will always have accidents, but can we prevent the big catastrophes?

“New models are coming to the factory thick and fast. We do our work so that the consumer doesn’t have to worry. People are a lot harder to fix than cars.” 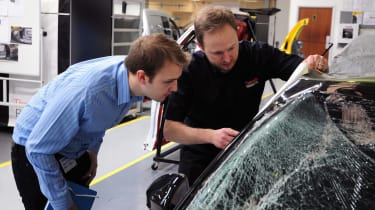 A further challenge to Thatcham is the rapid development of technology that’s fitted to cars – including the changing methods of power as the internal combustion engine increasingly gives way to hybrid set-ups and ultimately full electric power.

Neale Phillips, strategy and development director, says: “We have never seen the rate of change in vehicles that we are seeing today – it’s exponential. More sensors on EVs and safety systems make repairs more complex and may push up repair costs.”

The complexity of any repair and how well a car performs in a crash lab all feeds into how much drivers pay for their insurance policies via group ratings. Thatcham assesses every car and gives it a rating between one and 50 to advise insurers on what they should be charging drivers. Getting a better rating means a car is cheaper to repair, safer in a crash and, in this day and age, has more advanced safety tech fitted. 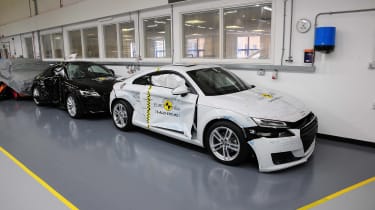 Manufacturers’ safety kit is a growing area for Thatcham, and technicians spend hours analysing data to see which systems have the biggest impact on safety. If there’s something that has a real-world benefit in cutting claims or reducing accidents, Thatcham will incentivise it by offering a lower insurance group to cars fitted with it.

Phillips explains: “We test each generation of a model and if, for example, two or three have autonomous emergency braking fitted, it gives it a different risk profile.

“Manufacturers aspire to get the best rating on their cars that they can, as it means it’s safe and cheaper to insure – which will result in them selling more cars.”

Thatcham works between the manufacturer, insurers and consumers to get the best deal for everyone while ensuring drivers are safe and not being ripped off.

It’s an unsung role to play, but one that’s necessary. Summing up what it does, Phillips adds: “Every bit of research we do is about what we can do to reduce claims costs – be it in repairs, safety, theft or whiplash.”

What are your top car security tips? Let us know in the comments... 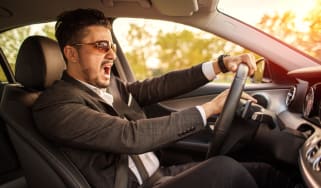 Children think their fathers are better drivers than their mothers, but say dad drives too fast and is more susceptible to road rage
New smart motorways see rise in serious collisions