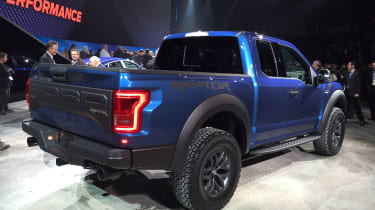 Ford's showstopping GT supercar may be grabbing all the attention fat the Detroit Motor Show, but the brand has debuted two other high-performance models for the first time. The latest version of Ford's mad F-150 Raptor off-road super-pick-up was unveiled for 2017 release, and the Shelby Mustang GT350R made its first entrance.

Ford's history of creating pumped-up versions of its workaday pick-up trucks was topped when the unhinged Raptor version of its F-150 appeared on the scene in 2010. The brand has now unveiled a reworked and updated version set for 2017 release, sporting the same (albeit single-turbo) 3.5-litre EcoBoost V6 as that GT concept. 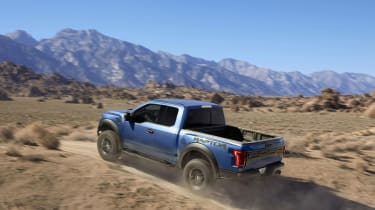 Ford claims the new Raptor will produce more power and torque than the current car's 411bhp and 588Nm of torque, despite the loss of two cylinders. The hot version of the new F-150 will also get a new 10-speed automatic transmission to put that power down. The bad news? It doesn't look set to come to the UK any time soon.

The Raptor features a clutch-driven, mechanical-locking four-wheel drive system with a Torsen front differential. There's also a new Terrain Management System with six different modes for a huge variety of off-road situations. Ford also claims the new model is 227kg lighter than before thanks to the use of aluminium, which should improve both performance and efficiency.

Ford's in-house tuning division Shelby has also been busy as the racier GT350R version of the new Mustang coupe appeared at Detroit. Described as the "most track-ready road-going production Mustang ever", the 'R' builds on the standard GT350 we saw last year. It's a shame then, like the Raptor, it won't reach our shores. 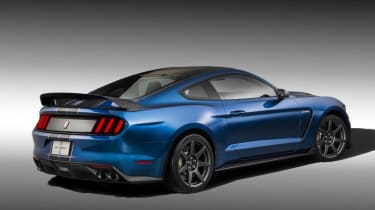 Using that car's 5.2-litre flat-plane crank V8 to produce more than 500bhp, it's mated to a six-speed manual transmission and a tuned limited-slip Torsen diff. The car is also 59kg lighter than the GT350 thanks to extensvie weight saving inside and out.

Carbon-fibre wheels appear for the first time on a production car, as well as an aggressive new diffuser and hood vent. A revised front splitter completes the revisions.