Cars you might have missed at the Frankfurt Motor Show 2015

The wild, the weird and the wacky - here are the cars from Frankfurt 2015 you might have missed 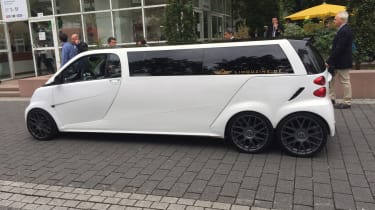 While the world debuts of more mainstream cars like the Jaguar F-Pace, Kia Sportage and the Renault Megane stole the column inches, the Frankfurt Motor Show was also home to some weird and wacky cars too.

• Read all the news from 2015's Frankfurt show here

Thanks to the sheer size of Frankfurt’s exhibition centre, a wide selection of machinery for all tastes and budgets was on display – from fledging companies to some of the biggest names in the business fielded oddities.

Here is our pick of the cars that may have escaped the media’s attention throughout the two press days. 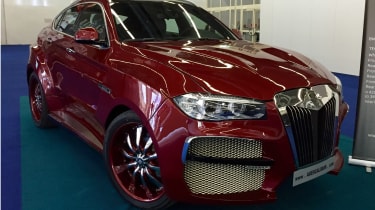 Lithuania-based AG Excalibur has come to fame by producing two one-offs; the first was a wacky take on the BMW 6 Series Coupe called the AG Shark and, and more famously, the AG Excalibur. Named after the company, the outlandish car used a Mercedes CL 500 as a base.

At Frankfurt the company showed off the Alligator – based on the BMW X6, it has an ‘interesting’ bodykit and a re-trimmed interior that includes Mercedes air vents.

An unusual Smart car debuted at the Frankfurt show and it wasn’t near the Mercedes stand. This is the Smart MadeForSix built by German company Limouzine and was a frequent sight driving around inside the show’s vast complex of halls.

Stretched from the standard car’s 2.69-meter length to 5.5 metres, there’s a third axle, six wheels and sporty 18-inch alloys. On the pavement side, a door in the middle opens out like the doors on a Mercedes SLS and allows access to the leather-lined interior. TVs and coolers are included, too. 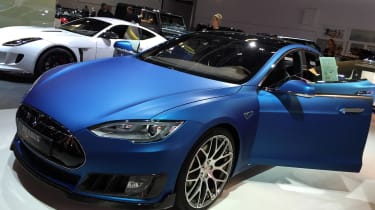 Available on every Model S from the 70 right up to the super-fast P85D, the ‘Brabus Zero Emission’ upgrade just concerns the styling for now – it includes full carbon fibre additions and 21-inch alloys. Brabus says this is just the start, saying the programme will be ‘expanded continuously’ meaning performance upgrades could appear too. 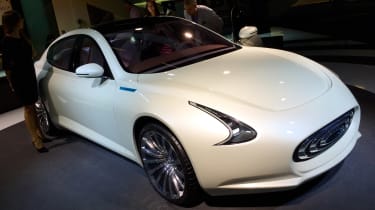 It’s not just Tesla striking out with electric saloons as now Taiwanese car maker Thunder Power wants to gatecrash the party too. Claiming to offer 430bhp and a 0-62mph sprint time of under five seconds, the Thunder Power can also manage 373 miles on a full charge.

The firm means business though – it’s hired former Bugatti technician Dr Peter Tutzer to oversee the project. The car is currently undergoing testing in Milan, ahead of an alleged 2017 European release. 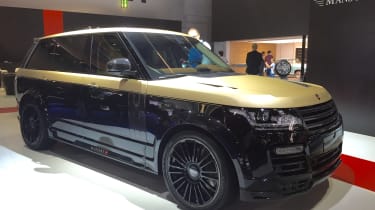 Mansory is well known for modifying Range Rovers and its latest car caused quite a stir at Frankfurt – not least of where Mansory’s stand was. While Jaguar Land Rover was proudly showing off its James Bond cars, directly opposite was Mansory showing off the maxed-out Rangie.

Along with the bold two-tone paintwork, 22-inch wheels and lowered suspension, the Mansory Range Rover Autobiography LWB has curtains to separate those in the front from the back passengers, and plenty of leather and carbon trim. 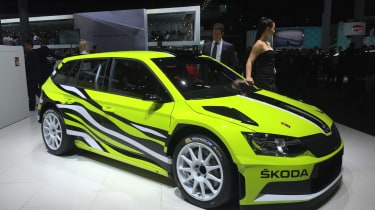 There’s a centrally-mounted exhaust pipe and the power comes from a rally-spec 1.6-litre turbocharged four-cylinder petrol engine. There’s four-wheel drive and a five-speed sequential gearbox, too. 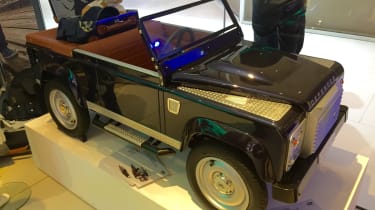 If you can’t quite stretch to buying one of the last Defenders to roll off the production line, Land Rover have a small consolation prize for you.

The Defender pedal car is built with the same handcrafted care and attention the full-size Defenders enjoy. There’s also leather and wood trimmings too for that special touch. The only problem is that it costs £10,000. 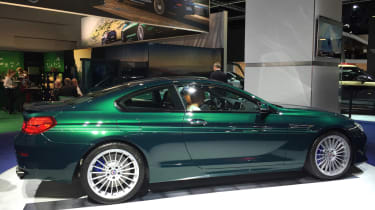 Alpina sold out of its Edition 50 models first revealed at the Geneva Motor Show. Six months later, the firm debuted the B6 BiTurbo in Edition 50 trim – a special version to mark five decades of Alpina and BMW’s relationship.

Which of our slightly odd Frankfurt Motor Show stars is your favourite? Let us know in the comments below...