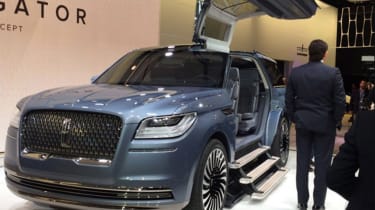 Just unveiled at the New York Motor Show, the Navigator concept also features gull-wing doors and steps leading up to its vast cabin that wouldn’t look out of place in a cruise liner’s ballroom. Neither feature will make it to production, but the rest of the concept previews a new Lincoln Navigator luxury SUV that will go into production in 2017.

With a much more contemporary style than the outgoing model, the new Navigator SUV shares some of its design elements with the latest Lincoln Continental – a new luxury saloon that also goes on sale later this year in the US. 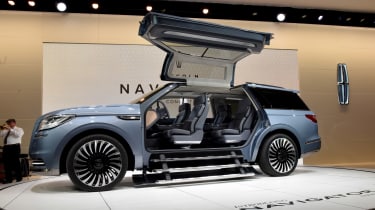 As well as featuring a new 400bhp+ twin-turbo 3.5-litre V6 engine, the new Navigator could potentially share some of the Continental’s platform engineering. If that’s the route Lincoln is taking, it would provide the basis for a much-enhanced driving experience over the current Navigator, which features more rudimentary truck-like body-on-frame construction. Lincoln hasn’t said which way it's going, but Lincoln’s upmarket SUV competitors like BMW, Mercedes and Land Rover will be among those watching with interest.

What Lincoln has confirmed, is that the suite of technologies on show in the Navigator concept is likely to form part of the production model’s option list. 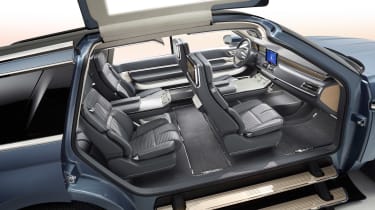 As the official pictures show there’s emphasis on connected in-car entertainment with a huge touchscreen for the driver, and tablet style screens for all passengers mounted on the headrests in front. Other on-board technologies include pre-collision braking with pedestrian detection, as well as 360 degree cameras, lane-keeping and parking assistance – features that buyers of premium European SUVs are already well used to.