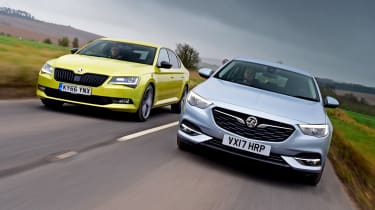 The battle for honours in the company car park changed with the arrival of family SUVs, because many buyers ditched their conventional saloons and hatchbacks for something with a little more style.

But while fleet warfare might be fought in a different way these days, there’s still a group of large, practical and tech-filled hatches that’s perfect for business people or families wanting affordable transport.

None is more cost-effective than Vauxhall’s Insignia Grand Sport. But while it has price on its side, it’ll have to offer more than just value for money to beat the talented Skoda Superb, which has ruled the roost here for years. 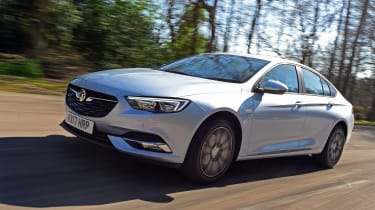 For: Affordability, ride comfort and refinement, some clever infotainment technologyAgainst: Not quite as good to drive as Skoda, gearbox could be more positive, rear visibility

In an effort to compete against the growing group of SUVs, Vauxhall has redesigned its Insignia large family hatchback, offering buyers something that’s a little more stylish, without sacrificing the car’s trademark practicality.

In the transformation to the Insignia Grand Sport, the brand has also updated the interior tech to bring the ageing previous Insignia bang up to date, placing the model on a level playing field with some of the best cars in the business. 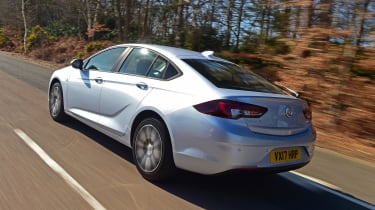 At the heart of the matter is the Insignia’s usability, and with 490 litres of luggage capacity with the seats up (underneath the load cover) there’s masses of space in the Vauxhall.

However, this doesn’t come at the expense of room inside the cabin. The Grand Sport has a more flowing roofline than its predecessor, and that means access to the rear is slightly more compromised than with the squarer-shaped Superb, but once aboard headroom is plentiful and even taller passengers won’t brush the roof.

Legroom is good, too, with plenty of space to the seat in front, so longer journeys shouldn’t be a problem for four adults. That’s thanks in part to the Insignia’s controlled, but forgiving, ride.

Our SRi VX-Line Nav model was fitted with the £850 FlexRide adaptive dampers that broaden the car’s ability even further.

In Tour mode the chassis set-up is soft and compliant, absorbing corrugations over bad surfaces with a smooth edge, despite this trim level’s standard 18-inch alloy wheels. 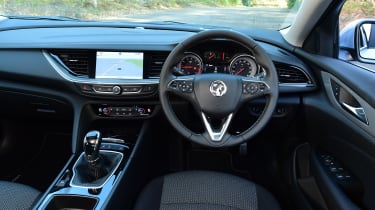 Switch to Sport and you don’t lose too much of this welcome suppleness from the set-up, because the suspension’s fluidity remains. You get a little more body control for faster driving on country roads, but the Grand Sport is at its best in the most comfort-orientated setting.

As our Through the Range panel shows, there’s a fair difference between the finance deals on offer, and that stems from the Insignia’s incredibly affordable list price. For £24,250 you get a 168bhp 2.0-litre turbodiesel engine compared with the Skoda’s 148bhp unit, while the level of kit on offer is a match, too, despite the £4,965 saving.

The Vauxhall comes with an eight-inch touchscreen infotainment system with nav, DAB, Bluetooth, Apple CarPlay and Android Auto, plus Vauxhall’s OnStar system, dual-zone climate control, cruise control, sports seats and even a heated steering wheel. However, heated seats are a £410 extra as part of the winter pack. 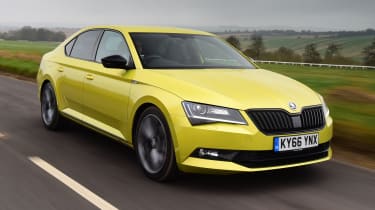 The Skoda Superb is a firm Auto Express favourite, having picked up a hat-trick of Best Family Car titles at our New Car Awards. The combination of space, performance, efficiency and tech is convincing, and in Sportline trim the gloss black grille, window surrounds and 19-inch alloys mean it arguably looks even sportier than its Insignia rival here.

While those 19-inch alloys give the Skoda plenty of appeal, they do affect the ride quality. The car isn’t as forgiving as the Insignia is. It crashes over bumps more and doesn’t have the same absorbent edge on the road. The £760 Dynamic Chassis Control adaptive dampers help negate this a little when in Comfort mode, but not to the extent that the Skoda surpasses the Vauxhall for compliance and comfort.

The trade-off is that the Skoda is more direct on twisting country routes. The steering is sharper and less spongy than the Vauxhall’s, while there’s marginally more grip, too, because the Superb controls roll better than the Insignia, which leans a little more through bends. 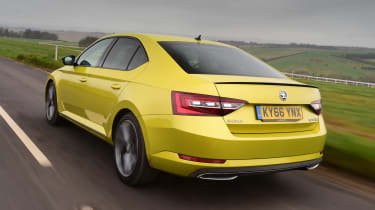 Despite the sporty looks the Skoda can’t match the Insignia’s performance, either. In fifth and sixth gears between 50 and 70mph it trailed its rival thanks to the Vauxhall’s extra power and torque. The Superb took 7.3 and 9.8 seconds, which was 1.4 and 1.8 seconds slower than the Insignia respectively. Off the line to 60mph and flat-out through the six-speed manual box (although our pictures show a DSG auto model) the Skoda closed the gap, but in-gear flexibility is arguably more useful, especially if you make the most of these cars’ impressive load capacities.

Here the Skoda has the edge, thanks to its huge 625-litre boot. But despite a 135-litre advantage over the Vauxhall, most owners will find there’s more than enough room in the Insignia.

The difference in rear legroom isn’t quite as pronounced because the Skoda offers plenty of space, although it does feel darker inside due to the Sportline model’s black Alcantara trim. Like in the Insignia, the sports seats here offer good support, while there’s not much to split the two in terms of material quality. 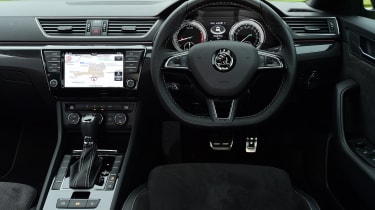 Both feature soft-touch plastics on the dash, but elsewhere in the cabin the harder surfaces show where money has been saved. Yet you do get plenty of kit, with a 9.2-inch infotainment system featuring sat-nav, DAB, a WiFi hotspot, keyless entry and go, adaptive cruise, xenon headlights, climate control and parking sensors. 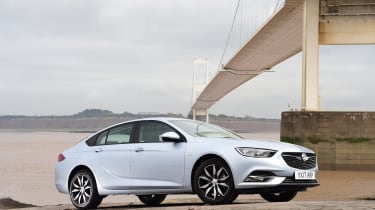 The Insignia’s affordability seals the win. It’s not quite as practical as the Skoda, but the difference is minimal, yet the extra performance, almost identical running costs, impressive comfort and advanced tech mean, given the fine level of value, it deposes the Superb.

While the Superb is still a brilliant family hatch, in Sportline trim it doesn’t make as much sense as SE spec. It’s efficient and fast enough, but the refinement and ride can’t match the Insignia’s, plus the near-£5,000 price difference means the Skoda trails in the Vauxhall’s wake.