Tight finances mean supermini sales are booming, and VW’s new Polo aims to cash in with a classy, Golf-style look. Can it beat rivals from Mazda, Renault and Ford? 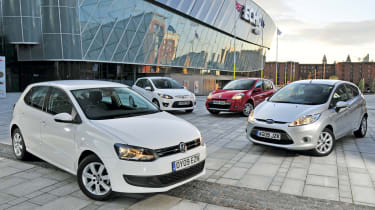 The Polo is a supermini institution. Since its arrival in 1975, the VW has been famed for its solid build, classless appeal and reliability. But the outgoing model plunged down the charts as younger rivals left it behind.

The new fifth-generation variant is aiming to revive past glories, so the competition had better be ready for a fight. As well as looks inspired by the Golf and more space than ever, the lighter and more fuel-efficient Polo will come with a selection of five engines: three petrols and two diesels.

When it arrives on 16 October, it will enter the market’s most competitive sector– and to see how it rates, we took a 1.6-litre TDI SE on a 1,000-mile road trip with three of its most talented rivals.

Our 2009 Car of the Year, the Ford Fiesta, poses the toughest test, but alongside it is Renault’s recently revised Clio.

In diesel form it shouldn’t be underestimated, while the sporty and stylish Mazda 2 is another talented alternative. With such a line-up, the Polo isn’t in for an easy ride...

In the fiercely contested supermini sector, any newcomer has a tough job of rising to the top. So does the new Polo offer enough?

In short, not quite. While the VW is better than the old car in nearly every respect, its low-output diesel isn’t sufficiently impressive.

It is well built and cabin space is a match for rivals’, but vague steering, uninspiring handling and an uncooperative gearbox all disappoint.

The 1.6-litre TDI is unrefined and lacks punch – and the more powerful 88bhp version costs £115 more than our Fiesta.

Strong residual predictions are a welcome plus for the Polo, yet in such exalted company it finishes fourth – just behind the Mazda.

The pretty 2 is fun to drive, well built and a good performer, but a firm ride and some cheap cabin plastics let it down. It’s also the least practical car here.

That leaves the Clio and Fiesta to fight it out. The Renault provides space, refinement and comfort in a practical package, yet it simply can’t match the Ford’s all-round excellence.

Our class champ is worth every penny with its classy looks, solid build and supreme driving experience.

The Fiesta has done for superminis what the first Focus did for family cars.

Despite poor residuals, the great looks, modern cabin and fine dynamics make it a winner.

It can’t match the Fiesta for fun, but a roomy cabin, punchy engine and composed chassis mark out the Clio.

It’s comfortable and refined, and the fresh look is welcome.

It’s also well priced, but it is neither as refined nor as practical as the cars ahead of it in this test.

The cheapest model here, but also the least powerful.

You need to opt for the 88bhp variant to get comparable performance, which makes VW more pricey than rivals.