VW’s Polo GTI and SEAT’s Ibiza Bocanegra use the same engine, but which is better? Plus, how do they rate against VW’s Nineties sizzler? 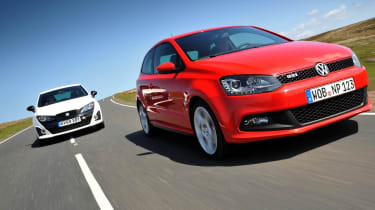 Volkswagen is credited with inventing the GTI genre, and with six generations of hot Golf under its belt, it’s obvious why. The badge has also been available on the Polo since 2002, but the supermini has never been viewed in the same light as its big brother. Could this be about to change?

The introduction of a new GTI aims to redress the balance, and it’s the first Polo to use a supercharger since 1991’s G40 Coupé. With looks inspired by the Golf GTI, plus an interior that has already been praised for its quality, the new hot Polo promises to be the company’s best yet. The highlight is the 1.4-litre engine, which uses a turbo as well as a blower to produce 177bhp. And thanks in part to the DSG twin-clutch gearbox, it’s the quickest Polo GTI ever.

If you’re after dramatic looks from your sizzling supermini, then SEAT’s Ibiza Bocanegra is worth considering. It uses the same engine and gearbox as the Polo, but has a racier shape. The performance figures match the VW, while a value for money price tag and long kit list make it hard to beat.

Neither of these superminis provides the ultimate in driver appeal, and there are lots of more focused hot hatches around. Instead they aim to mix strong performance with everyday usability and head-turning looks. If that’s what you want, the Polo is a convincing package.

Like the Golf, it is understated with an ability to suit any occasion, from race track to posh hotel. Its strong performance and surefooted handling join a classy cabin and well judged chassis. It’s not an involving experience, but the VW’s softer side elevates it above the SEAT.

If you want to shout about your car’s performance potential, then the loud-mouthed Bocanegra is for you. But its cabin isn’t as appealing as the Polo’s, while its uncompromising suspension is likely to become tiresome. And without the dynamic rewards to make it worth the discomfort, it takes second spot.

1. Polo GTI As an all-rounder the Polo GTi is definitely one of the best in the class – it looks great, in an understated way. The interior is a belter and the engine provides smooth yet rapid progress. Keen drivers will lament the lack of a manual gearbox and the handling could be a little sharper, but in this test it has the measure of its rival.

2. Ibiza Bocanegra On paper or in isolation the SEAT is an enjoyable machine. It’s powerful, nimble, entertaining and cheaper than the Polo. It also boasts head-turning looks and a quality interior. However, the Ibiza lacks the all-round polish of the VW, and its raucous character will be a turn-off for some.