On the whole, TVR's aims are simple - to offer supercar speed and drama at a fraction of the cost. 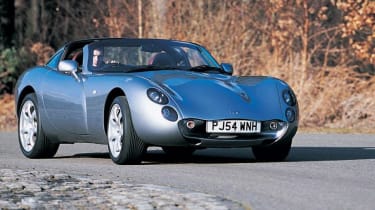 There are few more thrilling ways to travel than in a TVR. The firm's new Tuscan can invoke fear and excitement in equal measure, but now it is one of the strongest models in the range. The lack of traction control and ABS, plus a lively chassis, mean it's not for the faint-hearted, though.

On the whole, TVR's aims are simple - to offer supercar speed and drama at a fraction of the cost.

The no-frills, high-design formula has kept the British sports car marque on enthusiasts' wishlists. But can it continue to deliver on its promise - and will the widely reported arrival of a 20-something Russian billionaire change things for the better?

The linchpin of TVR's current range remains the Tuscan. With the styling nearly five years old, the Blackpool firm is putting the finishing touches to a revised version - and Auto Express took the wheel to see if the heavyweight has been refined without losing its punch.

Once you have fought through the crowd of people attracted by the exotic bodywork, design changes are easy to spot. At the front, a more aerodynamic nose is fitted, with fared-in headlamps and a lower spoiler. There has been a similar makeover at the rear, where new lights fit flush with the bodywork.

Pressing the trademark electric door release located under the wing mirror reveals a resculpted cabin. The revised dashboard is a visual treat and offers a new digital display and updated switchgear. Pull a couple of levers in the boot and the roof panel can be removed to shed even more light inside.

While the interior is great to look at, not everyone will be comfortable. The seats are fine, but the huge transmission tunnel forces the driver close to the door, which limits elbow room.

However, once on the move the ergonomic compromises are soon forgotten as the TVR bombards the driver's senses with sound and acceleration.

The entry-level Tuscan is powered by a 3.6-litre straight-six-cylinder powerplant, which delivers 350bhp via a five-speed gearbox to the rear wheels. The gutsy engine provides plenty of thrust, with TVR claiming a 0-60mph sprint time of only 4.4 seconds and a potential top speed of 180mph.

The revamped Tuscan has thoroughly re-engineered suspension and chassis settings, intended to make its immense power more accessible and less intimidating. Despite this, extracting the most from it still requires a firm hand and a level head.

With no traction control, the wheels are prone to spinning in all but the highest gears, calling upon quick responses to prevent sudden changes of direction as the rear tyres struggle for grip.

The lack of ABS will also put off some buyers, but the firm middle pedal provides plenty of feel and the Tuscan is stable under braking.

Treated with respect, the TVR is a fine-handling sports car - more mature and driveable than other models in the firm's line-up. The softer front suspension also makes it less daunting when cornering, while the revised steer-ing gives a greater sense of control.

In isolation, the Tuscan is well balanced and capable, but drive it alongside Porsche's cheaper Boxster S and the Tuscan's brutal execution makes it feel unwieldy and unforgiving.

However, at £39,850, the TVR is hard to match for thrills per pound. There are more refined and capable sports cars around, but if it's individuality and heart-in-the-mouth excitement you are after, look no further.