Say hello to the Mitsuoka Orochi, Japan's answer to the Ferrari 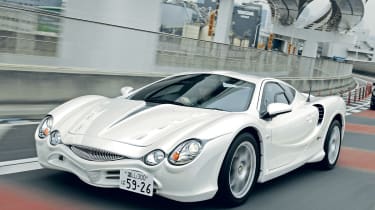 Orochi means huge serpent in Japan, and the Mitsuoka coupé certainly looks wild. It’s all too tame from behind the wheel, though, which is a pity. Proven mechanicals and solid build quality mean it won’t let you down, but they’re hardly the hallmarks of a supercar. So, while the well developed suspension and incredible styling deserve credit, the Orochi needs a more powerful and charismatic engine to back up its appearance. If it was to be sold in the UK, its cost would rise, putting the Mitsuoka into competition with some very capable European rivals.

It looks as though it’s from another planet, but this outrageous supercar is Japan’s answer to Ferrari’s finest! If you want to really stand out from the crowd, nothing comes close to the Mitsuoka Orochi.

Believe it or not, the two-door uses both Honda and Lexus parts, but its bespoke bodywork makes it unlike anything else on the road. Mitsuoka started life as a replica car builder, converting big Nissans to resemble Daimlers, and tiny Daihatsus to look like Rileys. Now, it is regarded as Japan’s 10th official motor manufacturer – and the hand-built Orochi is its wildest model ever!

The Honda NSX-inspired coupé is being billed as a supercar, and even though it made its official debut at the Tokyo Motor Show back in 2001, it has only just landed in Japanese showrooms. It’s already making quite an impact, as pedestrians couldn’t take their eyes off the stunning two-seater during our exclusive drive along the streets of Tokyo.

It’s easy to see why, because the distinctive grille, twin headlamps and swooping bodywork are all designed to grab your attention. The circular light clusters and vertical window at the back are clearly inspired by old Ferraris, and the attention the Orochi attracts puts it on a par with any of Italy’s legendary marques.

Open the door, however, and that impression quickly begins to fade. As with supercars of old, climbing aboard requires the flexibility of a gymnast, thanks to its wide sills and low ride height, and once inside, the cabin is a disappointment. There’s plenty of leather, and build quality is impressive, but it fails to match the drama and excitement of the exterior. The gear selector for the five-speed automatic box is sourced from a Lexus RX off-roader – and provides the first hint that outright performance has been sacrificed for comfort.

The Orochi is powered by a Lexus 3.3-litre V6 engine where you would hope to find something with at least an extra pair of cylinders. So although its mid-engined layout and outrageous styling scream to you supercar, the Mitsuoka’s 231bhp powerplant does anything but. Its modest output and 327Nm of torque result in frustrating performance.

The Orochi is the brainchild of company founder Susumu Mitsuoka. It’s the result of his desire to build a vehicle that anyone can drive – and this idea has been followed to the letter. Where you expect the car to be a bruiser, it’s actually a cruiser. The benchmark 0-60mph sprint takes a rather lengthy 7.0 seconds, and the exhaust note is also short on drama.

That’s a shame because the newcomer’s spaceframe chassis sits on race-style double wishbone suspension, and has been tuned by a for­mer Mazda chief test driver.

As a result, the Orochi rides excep­tionally well, and while it won’t win any awards for its ultimate cornering ability, it strikes a fine balance bet­ween comfort and handling. It feels superbly planted through fast bends, but lacks the involvement of an out-and-out sports car.

Brakes borrowed from the Honda Legend deliver confidence-inspiring stopping ability, and they are more than up to the task. The trouble is, the Mitsuoka is heavier, slower and less practical than the Honda NSX, even though the Orochi boasts its own unique underpinnings. Yet in spite of this, the machine has still proved an enormous success in Japan, where standing out from the crowd is what really matters.

The company is already selling all the cars it can build, and is preparing to boost output to six models a week in the months ahead. It’s just a shame there isn’t a more extreme version that delivers the performance capable of matching its sensational looks.

Rival: Porsche 911 germany’s best-known supercar sets the class standard for driver involvement, and despite its familiar looks, the 911 trumps the Mitsuoka from behind the wheel. With a broad line-up, it’s also likely to hold its value better than the unknown Orochi – but is far more expensive.