Swedish firm gets ready for some rough times with this stylish off-roader. 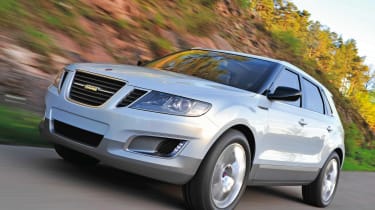 Saab’s entry into the premium SUV market certainly looks the part, and its minimalist interior should strike a chord with buyers looking for something different from the norm. Its green credentials will add to its appeal, but the firm shouldn’t ignore the growing controversy over the true environmental impact of biofuel. We certainly hope the production 9-4X matches the concept’s potential when it hits the UK next year.

It’s been a long time coming, but a brand new production car is finally about to emerge from Saab.

The 9-4X BioPower Concept was officially unveiled at the Detroit Motor Show in January, but nobody has sampled Saab’s SUV on the road – until now. We were first behind the wheel of the newcomer, and can reveal it won’t disappoint when it hits showrooms at the end of 2009.

The new luxury 4x4 couldn’t come at a better time for Saab, as the Swedish firm looks to resurrect its image as a maker of quirky alter-natives to BMW – and the firm sees the lucrative SUV sector as a vital part of that strategy. Yet at a time when ‘gas-guzzlers’ are increasingly frowned upon, Saab will continue to fly the BioPower flag in an attempt to make the 9-4X an off-roader with a conscience. So the model can run on regular unleaded petrol, crop-based E85 bioethanol or a mixture of both.

The green fuel has a higher octane rating than unleaded, so it burns more efficiently and means the 9-4X can deliver 300bhp and 400Nm of torque from its 2.0-litre turbo engine.

However, the limited availability of E85 in the UK – there are currently only 21 sites which sell it – means the 9-4X will be drinking from the unleaded pump in the main, which won’t help its green credentials.

No official economy figures are available for the new BioPower unit, but the 2.0-litre engine in the 9-3 saloon achieves 35.8mpg on average and emits 189g/km of CO2 – certainly not the greenest set of statistics. And the increased engine output and kerbweight of the 9-4X mean those figures will only drop further.

But that’s only half the story. Biofuel cars are tested when using normal unleaded, but Saab claims that the carbon-neutralising effect of running its engines on bioethanol equates to a 50-70 per cent reduction in overall CO2 emissions. On the road, the performance benefit of the higher octane fuel is obvious. Of course, the ‘concept’ status of the 9-4X meant we weren’t able to fully explore the available power of the direct injection unit, but all that torque makes rapid progress easy in the big SUV.

And it grips well, too. Saab’s XWD four-wheel-drive system sends power to the back wheels the majority of the time – and only uses all four wheels when necessary.

There’s no doubting that the 9-4X BioPower will be more than a match for SUV rivals such as the BMW X5 and Volvo XC90 in the performance stakes, but how will it fare in the urban sprawl, where it will spend most of its time? Fortunately, the Saab makes the grade. The suspension set-up is well judged, and the ride compliant and comfortable over most surfaces.

The cabin impresses, too. By taking cues from its aviation heritage, Saab has made it very driver-focused, with an upright dashboard reminiscent of the 9-3’s. However, better quality materials are used throughout, and there’s a neat integrated LCD monitor.

It’s a cutting-edge look, and one that Saab intends to keep largely intact for the production car, although lesser models will lose the chrome trim and fancy screen.

The 9-3-inspired detailing continues on the outside, most obviously at the front, which has distinct chrome surrounds for the headlamps and grille. The side profile is marked by a small glass area given a wraparound appearance thanks to the black pillars. At the rear, there’s a shallow rear screen, quad tailpipes and 9-3-style tail-lights.

Saab needs the 9-4X to sell well, so expect a diesel version to appear early in 2010, offering a more conventional way to keep CO2 emissions in check.