Auto Express is first to get behind wheel of the world’s cheapest car. What’s it like? 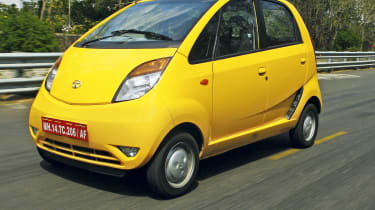 Hats off to Tata. When the Indian firm announced its plans to sell a four-seater car for the same price as a large flatscreen TV, everyone thought it was being ambitious. But the Nano is an impressive achievement. Yes, it’s basic and sluggish. Yet in many ways it’s as revolutionary as the original Mini and VW Beetle. We’ll be interested to see how the Nano is received when it arrives here in 2011 – by which time a raft of tweaks should make it a viable budget buy.

It's been a long wait – but finally, Auto Express has become the first UK magazine to drive the Tata Nano! And the Indian budget machine could not have arrived at a better time.

The self-styled ‘car for the masses’ is already on sale in its home market for the equivalent of £1,500, and is scheduled to reach us in 2011. Promising to be the cheapest four-seater car in Europe, the Nano has a lot resting on its tiny shoulders – so how does it shape up?

Well, although the rather awkward looks don’t inspire much confidence, the space inside certainly does. Four adults can sit comfortably in the spartan interior, while the quality of the plastic and fabric is better than expected. There’s only 135 litres of luggage space, but if you fold the rear seats, this increases to a more reasonable 500 litres.

Start up the Nano, and it sounds a bit like a lawnmower. Although the all-aluminium 35bhp 624cc two-cylinder engine uses a single balancer shaft, it’s not very smooth.

At idle, you can feel the unit rocking, and under hard acceleration its vibrations filter through to the cabin. As the Nano is a city car, Tata has made low-speed acceleration a priority. The sprint from 0-60mph takes an epic 30 seconds and top speed is a mere 65mph, but the very short first and second gears ensure it covers 0-40mph in a much more acceptable 10 seconds.

In urban environments, the newcomer acquits itself well. A turning circle of eight metres makes manoeuvring and parking very easy, and the steering is light, even without power assistance.

The weight is biased towards the rear, and the Nano wears 155/65 R12 tyres at the back and narrower 135/70 R12 rubber at the front. Turn into corners too quickly, and body roll is pronounced – a feature that’s made worse by flat seats which don’t hold you in position. But the car grips surprisingly well and handles safely enough, with predictable understeer at the limit. Drum brakes on all four wheels do a fairly decent job too, while the ride on the bumpy Indian roads of our test route felt firm without being really uncomfortable.

Considering its price, the new car comes generously equipped as standard. In India, top-spec versions – which cost the equivalent of £2,500 – get air-con, front electric windows and central locking. That seems basic by European standards, but it has to be remembered that the Nano has been designed to a price – and engineers have had to look for every possible compromise. As the next cheapest car in India costs £1,300 more, and the only vehicle to be priced lower is a motorcycle, they have pulledoff an incredible achievement.

When the Nano comes here, significant changes will be made. European-spec cars will benefit from a bigger, more powerful three-cylinder engine and a five-speed auto. Their driving dynamics and build quality will also be improved, and an opening glass hatch will enhance boot access. Standard equipment will be more comprehensive, too, with ABS, ESP and airbags included.

There’s the promise of an electric version, while Tata is aiming for a four-star Euro NCAP crash test rating – which would be an incredible achievement for a car that will cost less than £4,500 in the UK.

Our time in this Indian-spec model confirms that the Nano is basic. But so is its price. Tata has done an amazing job, and we’re confident the car will be far better by the time it arrives in Europe. All that matters then will be how many buyers are willing to take the plunge.

Rival: Perodua Kelisa At £4,520, the Kelisa is currently the UK’s cheapest car. The four-seater features a 1.0-litre engine that returns 55mpg, and it sits in insurance group three – so it costs pennies to run. But the Nano should be even cheaper.