We take wild interpretation of new 2CV for a spin on the Champs-Elysées in Paris! 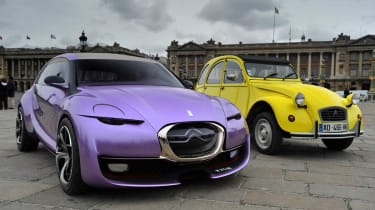 It’s impossible to get a fully formed impression of a concept seeing it on a show stand. Only when you get an opportunity to drive it and observe it on real roads does it begin to come alive – and the 2CV-inspired Revolte doesn’t disappoint. The flamboyant styling attracts crowds of people wherever it goes and brings traffic to a grinding halt – just as a ‘proper’ concept car should. It’s proof that Citroen’s design department is alive and kicking, and not afraid to pursue a look that’s entirely different from anything else. And according to the car’s designer we could be seeing elements of the Revolte on a production car sooner than you think.

It’s one of the most famous shopping streets in the world, and sits at the heart of French fashion... But more than that, it’s a throbbing thoroughfare filled with some of Paris’s wildest drivers. Welcome to the chaos of the Champs-Elysées!

Where better to try out Citroen’s most outrageous concept ever and its modern homage to the 2CV, the Revolte? In a world exclusive, Auto Express was invited to the French capital to drive the one-off show car which debuted at the last Frankfurt Motor Show.

Originally conceived simply to get Citroen noticed at Germany’s biggest expo, the purple machine is a car that commands attention wherever it goes. Designed to be the total opposite of the 2CV, this interpretation is as luxurious and ostentatious as possible – hence the name Revolte.

The roads around Paris city centre are home to the most notoriously aggressive drivers in the world, but when they see the Revolte coming everything grinds to a halt. At one point a Ferrari pulls up alongside, but for once it’s the driver of the Italian supercar who is staring at us.

In the flesh, it’s important to note that the Revolte looks far more squat and compact than it appears on a show stand. It sits on the DS3’s platform, but tiny overhangs mean it is even shorter. The exterior detailing is incredible. Its LED ‘eyebrow’ indicators, intricate carbon fibre mirrors and swooping body lines all hint at more adventurous future styling language for the brand, according to Revolte creator Carlos Bonzanigo. Meanwhile, the sardine-tin fabric roof is the most obvious nod towards the 2CV.

Open the ‘clap hands’ doors and the pillarless gap shows off that sumptuous cabin in all its glory. The novel three-seat layout is apparently designed ‘with women in mind’. The idea is that a mum will sit behind the wheel with her child strapped in next to her facing backwards, leaving any other passenger to recline on the velvet-covered rear chaise longue.

For such an extreme-looking car, the Revolte is surprisingly easy to drive. Under the bonnet is a plug-in hybrid powertrain. An electric motor drives the front wheels powered by a battery pack in the boot, while a range-extending petrol engine is poised to kick in when the batteries run low.

During our drive we kept the Revolte in full-electric mode. To pull away you simply turn on the motor with a button between your legs, twist a metal dial on the left of the steering wheel from ‘P’ to ‘D’ and squeeze the throttle. Ignoring the rock-hard ‘show’ suspension, the steering and brakes work well and the forward visibility rivals that of a C2.

The Revolte does exactly what any concept should. Its bold, retro- inspired styling creates a buzz for the Citroen brand, plus it previews a new fluid design language for future models. But what we really want to know is whether a production version will follow.

At this point we let Bonzanigo do the talking: “There has been much speculation about this concept previewing an entry-level DS – a DS2. I can’t deny or confirm these rumours, but the fact that it sits on a production car platform should tell you something.”