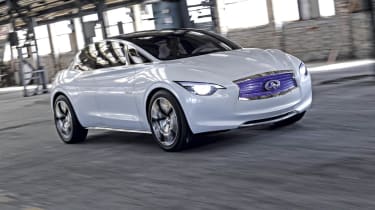 The Etherea lays to rest any doubts that Infiniti has what it takes to succeed against compact rivals such as Audi’s A3 and BMW’s 1-Series. As with the firm’s other models, this concept shows a realisation that a copycat product isn’t going to win over new buyers. The result is a car that should combine a quality feel with sporty dynamics. Add in practicality and economy, and there’s every chance this will be Infiniti’s biggest hit.

The Infiniti badge isn’t a familiar sight on our roads at the moment, but the Etherea concept is proof that Nissan’s prestige brand is serious about changing that. The firm plans to have two contenders in the booming compact executive sector by 2015 (see News, Page 15), and this car offers a hint at how one of them may shape up.
[[{"type":"media","view_mode":"content_narrow","fid":"69324","attributes":{"alt":"","class":"media-image"}}]]
It’s built on the same platform that underpins the Nissan Qashqai and Renault Mégane, and the Etherea is the first front-wheel-drive Infiniti. It’s also the smallest, even if its 4.4-metre length makes it slightly bigger than rivals such as the five-door Audi A3 Sportback and BMW 1-Series. But it’s the styling that really stands out. The Etherea features Infiniti’s familiar double-wave grille at the front, along with hooded lights that will soon be adopted throughout the range. The view from the front is the concept’s most appealing: simple yet eye-catching.
The sculpted flanks, which aim to disguise the car’s front-wheel-drive base by making the bonnet appear longer, aren’t as successful. But at least we now know what a car that claims to blur the boundaries between coupé, saloon, hatch and SUV actually looks like.
One benefit of the front-drive layout is generous interior space front and rear. The windscreen merges into the glass roof to increase the feeling of space inside, as do the rear-hinged back doors.
Neither is likely to feature on the finished model, though. Closer to reality is an iPhone-style touchscreen above the gearlever to replace traditional infotainment switches. Also likely to reach production is the distinctive dashboard layout.
By splitting the centre console from the dash, the designers have highlighted the lack of a transmission tunnel to give an airy feeling that highlights the generous legroom.
The Etherea concept features a fully functioning hybrid drivetrain. It’s a similar set-up to the one that’s used in the firm’s M35h executive saloon, with the electric motor sandwiched between two clutches. However, rather than a 3.5-litre V6 providing petrol power, the Etherea uses a supercharged 2.5-litre four-cylinder engine.
This unit gets the car moving, but it then steps back for the 33bhp lithium-ion battery-powered electric motor to maintain momentum. In line with Infiniti’s sporting intentions, the combination has plenty of urge.
Throttle response via the CVT gearbox is good, and because the petrol engine delivers its power through the electric motor, switching between the various modes is as seamless as we’ve come to expect from the latest generation of hybrids. Although the driving position is slightly higher than that of rivals from Audi and BMW, it still feels snug and sporty, thanks to the narrow window line.
The overall effect is more convincing and dynamic than the Lexus CT 200h, currently the only hybrid in this class. Infiniti will gauge reaction to the Etherea’s design, and our impression is that some elements are spot on, while others need some work.
One thing is certain: in 2015, the Etherea name will disappear and the production version will gain a letter and number, in line with other Infiniti models.
Share this on TwitterShare this on FacebookEmail