We get behind the wheel of the new MINI Roadster in Cooper S guise - can it rival the big-selling Mazda MX-5? 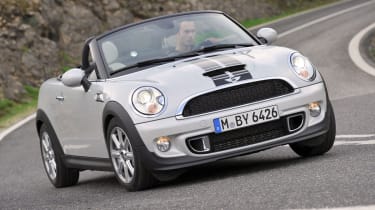 The Roadster trades the MINI Convertible’s back seats for a good-sized boot and an even sharper driving experience. Its turbo engine revs sweetly and sounds great, especially with the top down, while the handling is as involving as that of the MINI Coupe. For pure fun we’d still go for an MX-5, but the MINI appeals with its fashionable image, superb finish and chunky styling. It oozes fun and is a great addition to the range.

The MINI Roadster is much more than a soft-top version of the Coupe. It’s the first open-topped MINI two-seater ever and the first genuine affordable roadster rival to the MX-5. Prices start from £25 more than the cheapest Mazda, at £18,015.
To succeed in the roadster market, and make the sums add up, you need big sales. Mazda has managed this, but nobody else has yet. MINI may have found a way in through the back door, with the hatchback, Convertible, Coupe and now the Roadster all essentially re-clothed versions of the same car.
Video: watch our video review of the MINI Roadster
[[{"type":"media","view_mode":"content_narrow","fid":"69351","attributes":{"alt":"","class":"media-image"}}]]
There’s no mistaking the Roadster for anything other than a MINI. Its large round headlights, chrome-rimmed grille and crease-free bodywork are largely shared with its sister cars.
Yet above the waistline it gets a flat rear deck and a windscreen raked 13 degrees steeper than the Convertible’s. The sloped glass gives the car a sportier profile and helps reduce drag. A pop-up rear spoiler, which deploys automatically above 50mph, does the opposite.
Reach above your head, unclip the roof and it does the rest itself, folding automatically into a cubby behind you in only 10 seconds to reveal a pair of polished stainless steel roll hoops. As with the new Porsche Boxster, there’s no need for a tonneau cover as the outer skin of the hood faces up – and this saves time and weight.
The set-up doesn’t encroach on boot capacity: 240 litres is excellent for a roadster. There’s also a ski hatch for long objects.
As with the Coupe, the Roadster will be sold only in Cooper guise. There’s a single diesel – the 141bhp Cooper SD, returning 62.8mpg – alongside the 120bhp Cooper, 181bhp Cooper S and top-spec 208bhp John Cooper Works petrol cars.
We drove the Cooper S, which hits a sweet spot between performance and price. Starting from £20,900, it undercuts the entry-level Audi TT 1.8 TFSI by £4,580. Yet it offers 24bhp more power and sprints from 0-60mph half a second faster, in seven seconds.
It’s a peach of an engine, too, revving sweetly and smoothly, and with the turbo on boost it delivers a real shove in the back. Of course it doesn’t have the kick of the JCW, but we’d recommend you save your money and stick with the Cooper S, as it delivers more than enough performance.
The best thing about this engine, though, is the sound it makes. Push the Sport button and the rasping note hardens as the revs rise, followed by a flurry of pops and bangs when you lift off the throttle.
Additional bracing means the scuttle shake noticeable on the Convertible has been virtually eliminated, and there’s never a sense of the chassis flexing beneath you. A sports suspension pack can be specified, adding thicker anti-roll bars and stiffer springs and dampers, although why anyone would need it is beyond us.
The Cooper S has a firm ride, but it falls just short of crashy. It means the Roadster has the alertness from behind the wheel that we now expect in a MINI, and darts in and out of corners with barely any body roll.
The electric power-steering is pin-sharp and weights up nicely as the speed increases. Sport mode makes it heavier still, plus sharpens throttle response and cuts shift times if you go for the £1,195 optional six-speed auto box, although we’d stick with the precise six-speed manual.
Also recommended is the electronic differential – standard on the JCW, but optional on all the other cars. By braking the wheel with the least grip under cornering, it helps the Roadster stick to its line and reduces – but doesn’t remove completely – the torque steer usually associated with powerful front-driven MINIs.
As this car encourages you to up the pace, it’s reassuring that refinement with the hood up is similar to the Coupe’s. Drop the roof and with the windows up and the wind break in place, only the top of your head gets blown around. At motorway speeds, you can have a conversation without having to raise your voice, too.
The interior is identical to the Coupe’s, dominated by the central speedo, toggle switches and rev counter behind the wheel. For those who like to personalise their cars, the bonnet and boot stripes come in three colours. The hood is available in black only.
Share this on TwitterShare this on FacebookEmail