Car buyers were won over by the LS400 at launch 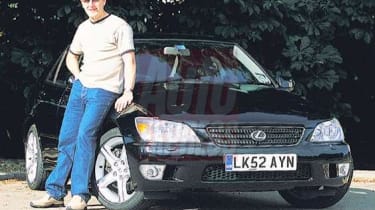 The key to Lexus's success is its marketing - 13 years ago, the Japanese luxury marque was unheard of. And while its sister company, Toyota, had a peerless reputation for reliability, Lexus still wasn't really a brand that could cut it with the likes of Mercedes, BMW and Jaguar in the golf club car park.

Enter the LS400, introduced in late 1989 and loaded up to the eyeballs with standard equipment. Lexus made no secret of its target market, and in addition to being as well built as its main rivals - the 7-Series and S-Class - the LS was sumptuous, luxurious and incredibly good value.

Canny buyers were won over by its sensible pricing, and the car's success paved the way for a raft of new Lexus models - firstly the 5-Series-rivalling GS300 in 1995, then the stunning compact executive IS200 in 1999.

The latter's triumph has been nothing short of phenomenal - the IS has become the fastest-selling Lexus ever, and dealers still have waiting lists now.

Its popularity can be explained partly by Lexus's carefully engineered image, but has more so due to with the car's abilities. A finely balanced rear-wheel-drive chassis and slick six-speed gearbox, plus the smooth six-cylinder 2.0-litre engine, tempted many potential BMW buyers, while Toyota's legendary reliability is also displayed by the IS.

Checklist * Front foglights are often cracked, so beware as replacements cost £100. * dirt on the spark plugs can cause problems with starting in hot weather. * Door latches on IS are often stiff, so lubricate front door pins regularly. * Check front seatbelts are stowed away properly to avoid annoying rattle.

Glass's View Buyers have taken to the IS200 on both the new and used markets, says Glass's Consumer Values. And despite a decline in the compact executive sector over the past year, the Lexus still holds its value well. Even the oldest three-year-old ones are worth more than 60 per cent of their new value - you won't find many for under £12,000, or £14,000 for a Sport, and they get snapped up quickly...My Lexus IS200... After looking at other choices in the compact executive market, Ross Meigh decided an IS200 was for him. "The Mercedes C-Class was too boring, the Jaguar X-Type a bit pricey and I wasn't very sure about the image of the BMW 3-Series," he told us. "A lot of people think BMW drivers are idiots, whereas with the Lexus you don't attract the same unwanted attention."

Ross is a big fan of his black SE, the second IS200 he has owned in three years. "It has everything I want," he continued. "I like sporty cars, but also need something that's comfortable and has four doors, because I have children." Ross, 33, works as a marketing director in Heathrow, west London, and covers about 12,000 miles annually, most of which is local commuting.

However, he does several motorway trips a year and has recently driven the Lexus to Munich and back on business. "It's a fantastic car," he added. "It feels well built, is great to drive and very smooth at speed. A Lexus isn't an obvious choice, but you soon appreciate what it has to offer."

As the IS300 didn't arrive until last October, it's pretty rare on the second-hand market - so the IS200 is the only real used choice, and all are well specced. If you're a keen driver, go for the Sport, otherwise pick up an S or SE. Steer clear of grey imports, called Altezzas. They're cheap, but lose value, and some parts are difficult to get.