The 407's a competent performer, but expensive to run in top-spec guise 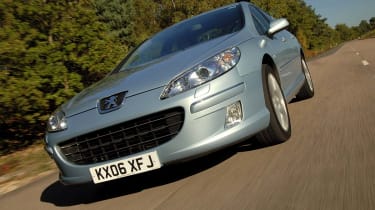 Say what you like about the proportions of the Peugeot 407, but you can’t deny it stands out from run-of-the-mill family saloons. However, the rakish headlights, stubby tail and cab-forward stance can’t divert your attention from the nose. The lengthy front overhang is the 407’s most questionable aspect. While it certainly improves pedes­trian safety, it’s hardly elegant.

It’s one of the reasons why the 407, despite its tidy rear end, doesn’t look as upmarket as the Lexus. And although it has a new, sporty-sounding GT badge, it’s not very dynamic to look at.

Inside it’s a similar story, where much of the switchgear is shared with lesser Peugeots. This also applies to the quality on offer. While the plastics couldn’t be described as flimsy, they’re simply not as tactile, well presented and durable as you would expect in a car touted as a compact exec rival.

The overall interior design also fails to impress; the button-heavy centre console is confusing, there isn’t enough stowage and the bulbous steering wheel boss is far from attractive. At least the sumptuous leather seats provide plenty of comfort. But Peugeot’s quest to take the model more upmarket comes at the expense of practicality – it’s not as spacious as many family car rivals. Still, that isn’t crucial here, as the 407 has more passenger and luggage room than the IS, plus a lighter cabin.

There’s more power, too. The 2.7-litre common-rail V6 is jointly developed with Jaguar, and has long been renowned for its refinement. However, on paper, it’s the hefty 205bhp punch that stands out most. The unit is mated to an unremarkable six-speed auto gearbox which dulls performance; this means you’re less involved in working it, so the 407 doesn’t seem much faster than the Lexus on the road. Yet at the test track it was nearly two seconds quicker from 30-70mph – due to its extra two cylinders and 500cc of engine capacity.

Things improve if you select manual mode in the transmission, and the Peugeot is also quieter outside than the Japanese four-door, has stronger brakes (although they are grabby at high speed) and pulls harder from lower in the rev range. But it’s not perfect. There’s too much delay when moving off from a standstill, the gearstick is flimsy and wind noise becomes intrusive.

Nevertheless, in terms of ability there’s little to separate these two. The 407 rides very well and, despite the GT tag, doesn’t fall into the usual sporting trap of being too firm. It’s supple, comfortable and capable in all conditions.

The trouble is, it’s not that engaging because the steering is over-assisted at low speed and the front-wheel-drive layout simply isn’t as well engineered as the Lexus’ set-up. Still, push hard and the Peugeot comes alive – in corners the chassis shines, the whole car proving eager and alert.

The 407 comes with a much longer standard equipment tally than the Lexus, but it simply doesn’t give the impression of being particularly luxurious – a major drawback when you’re shelling out the best part of £26,000.

Price: £25,925Model tested: Peugeot 407 V6 HDi GT 2.7-litre/205bhpChart position: 2WHY: With the 407 range starting from £15,700, there’s a choice of 17 models before you get to this flagship GT. Only available with an automatic gearbox, it boasts electric leather seats and sat-nav, plus an impressive 440Nm of torque.

A beefy V6 diesel will never be as efficient as a smaller four-cylinder unit – especially when mated to an auto gearbox. However, although 32mpg isn’t great, it’s close to the claimed 33.6mpg figure.

Peugeot dealers have a lacklustre reputation, but the firm has six times as many UK outlets as Lexus. The first three services are cheaper at £574, and the 407 only needs attention every 20,000 miles.

Business users will pay the price if they buy the V6 HDi. It emits 55g/km more CO2 than the Lexus, and so sits 11 tax brackets higher. Lower-band owners will face a hefty annual company car tax bill of £1,939.