Not as generously specced as the Peugeot, but the Lexus feels more luxurious 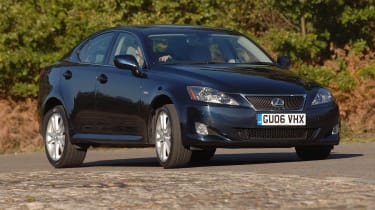 Image counts for a lot with business users, and the Lexus badge has far more kudos than Peugeot’s. Yet the Japanese firm’s meteoric rise into the pre­mier league of car brands is unique. By distancing itself from owner Toyota and not building mass market models, it’s been able to take up a position as a Far Eastern rival to BMW and Mercedes.

We’re not sure the styling is as palatable to European tastes, though. Deep flanks give a solid look, but the rear end is anonymous and the sharp nose nearly as controversial as the 407’s grille.

However, the build quality shines through. The panel gaps are tighter than the Peugeot’s, the doors shut with a reassuring thunk and the IS has exclusivity on its side, as it’s a far less common sight.

This car has a longer wheelbase than the 407, but it’s shorter, lower and narrower – and packag­ing clearly isn’t a Lexus strength. Boot capacity is only 378 litres, rear seat access is tight and headroom pinched, while front occupants will find the driving environment almost claustrophobic.

There’s not much wrong with the seat and its positioning in relation to the steering wheel, but large drivers struggle for elbow space and due to the short front doors, have visibility restricted by the B-pillars.

Yet despite this shrunk-in-the-wash feel, the cockpit is well laid out and ergonomically superb. The controls work with a precision that’s absent from the Peugeot, while build quality is in another league. Even if the bodywork is unconvincing, anyone looking through the windows of both cars will easily be able to tell which is the more upmarket.

However, cranking both engines into life may cause them to reconsider. Given that Lexus prides itself on its mechanicals, the 2.2-litre four-cylinder sounds rough at idle – and things don’t improve much on the move. The 175bhp diesel responds well from 1,800rpm, but the revs die away slowly when changing gear, which makes the engine feel lazy and reluctant when accelerating. And it simply doesn’t work that well with the manual gearbox. Buy a petrol IS and you can add a £1,000 optional auto, but this isn’t available on the diesel – a real shame, as the six-speed manual is a letdown. It’s jerky and snatchy at low revs, with a vague and notchy shift. Not what you expect from Lexus.

At least the engine itself is quiet and free from vibration, and the brakes remain firm underfoot – although they’re not actually that strong. Refinement is the IS’s trump card; there’s no better com­pact executive model in that regard.

Great insulation and sleek aerodynamics mean the cabin is silent at speed, while the ride is good, too. And although the handling isn’t as involving as that delivered by the BMW 3-Series, it’s nicely balanced and grippy, while the rear-wheel-drive layout means the steering is uncorrupted.

The IS is well equipped for an executive car, but it can’t match the 407 GT, even though the SE has a keyless system, climate control and an MP3 port.

Price: £25,243Model tested: Lexus IS220d SE 2.2-litre/175bhp printChart position: 1WHY: The Lexus is an exclusive machine. Only eight models are available, divided between four trims and two engines – this diesel and a 2.5-litre petrol. Our SE test car is only one step up from the base version, and prices start at £22,243.

The Lexus managed to return 35.8mpg – matching the official figure for urban driving. It was way off the combined claims of 44.8mpg, but at least the 65-litre tank gives a range of over 500 miles.

It’s Lexus’s best-selling car, yet the IS still maintains the firm’s strong residuals. Over three years, it retains just over half its list price, losing £5,106 less than the 407. It costs 58.9 pence per mile to run.

As Lexus has only 51 dealers, owners may have to travel further for a service. Despite its smaller engine, the IS needs checking 10,000 miles sooner than the 407. And the first three visits cost more, at £690.