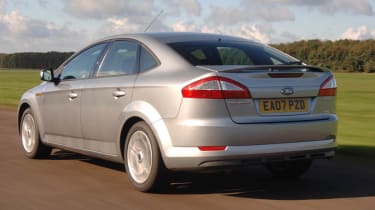 Bosses at Ford were determined that when the Mondeo was launched, it should make a big impact. And even though there are more and more examples on our roads, there is no denying that the newcomer has real presence.

While that is partly down to the bold styling, the car’s sheer size also makes it stand out. And whether you’re a fan of the looks or not, you can’t help but be impressed with its solid feel. A heavy thud of the doors confirms the fine build quality, which continues inside.

The dash design and some of the buttons aren’t quite as modern and sophisticated as the Renault’s, but the swept-back A-pillars and roomy driving position make the cabin welcoming. There’s an excellent range of seat and wheel movement, and the controls are well positioned. Driver comfort is excellent, and the multifunction controls on the steering wheel are very good.

However, we have a few niggles – for example, the speedometer increments are difficult to read and, with a conventional handbrake, the stowage around the transmission tunnel could be better organised. Some owners might find the chrome-effect central trim a bit too glitzy as well. Still, with its combination of space, quality and comfort, the Mondeo’s cabin is a great place in which to spend time. And once you start driving, the Ford really starts to come into its own.

The Mondeo is one of those cars that manages to be easy to drive and yet involving at the same time. All the controls are light and perfectly weighted, and provide a delicate amount of feedback. The six-speed manual gearbox has a slick shift, and the clutch is smooth and gentle. The 2.0-litre TDCi engine offers clean throttle response and delivers enough punch to match rivals, even though the car weighs 1,559kg – that’s 97kg more than the Renault.

It’s not the last word in noise suppression, though – at 65dB, the Mondeo is 2dB louder than the Laguna outside. But on the move it is refined and you only notice the engine because there’s barely any road or wind intrusion. It is also 2dB louder than the Renault at motorway speeds, coming in at 69dB, although both cars excel at insulating occupants from the outside.

The Ford particularly impresses with its ability to blend this comfort with entertainment. Despite its considerable size and weight, it never feels cumbersome. In fact, with a body that’s 130 per cent stiffer than on the model it replaces, plus a track width that’s grown by a massive 70mm, this car offers the kind of driver involvement you’d expect from a hot hatch.

Body control is flawless and, thanks to the light and yet wonderfully accurate steering, it turns in with confidence. Add strong brakes and fantastic grip into the mix, and you feel immediately at home in the Mondeo – especially as neither competitor can match its suspension control. The car remains composed at speed, deals with imperfections with ease and is far more cosseting than its rivals in town.

Stability control is standard, but the Ford’s dynamic abilities are such that the electronic intervention rarely kicks in during normal driving conditions. Other safety highlights include a driver’s knee airbag, and while this Zetec model isn’t quite as generously kitted out as the Laguna Dynamique S, it is £1,105 cheaper. So does the Mondeo retain its position as our class favourite?

Posting average returns of 39.5mpg, the Mondeo is 2.3mpg more frugal than the Renault and 0.8mpg better than the 407. As well as giving the best economy, the Ford has the longest range, at 608 miles.

The Mondeo is predicted to keep 39.6 per cent of its new cost, giving it the strongest residual here. As it’s so new and has received such praise, that isn’t a surprise. The diesel is sure to be the most popular used choice.

Three services for the Mondeo cost £555 over 37,500 miles. So it is the cheapest car of our trio to maintain. Ford has the biggest network in the UK, but it came a disappointing 25th in this year’s Driver Power dealer survey.

Thanks to its lower list price, the Mondeo is the cheapest company car – higher-band users pay £93 less than for the Laguna, at £1,562. Add options, and the tax bill will rise; the extra kit fitted to our car would hike the cost by £218.