It’s a big step forward, but is the Laguna good enough to beat the best? 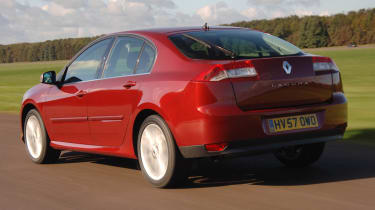 When the previous-generation Laguna arrived here in 2001, its styling was bold, angular and very different from anything else in the class. With its replacement, Renault hasn’t been quite as adventurous. In profile, the familiar Laguna shape remains, but the unusually placed headlights make the car look narrow – overall, the styling is an acquired taste.

Yet whether you think the new Laguna works visually or not, once inside it’s immediately clear that the interior has taken a big step forward. The dashboard is modern, curvy and smartly designed, while material quality is impressive. The plastics, switchgear and trim look and feel the most sophisticated of the cars in this test, while the Dynamique S gets aluminium dash inserts, dual climate control and an electric parking brake.

There’s a decent range of seat movement, so the driving position is comfortable and well placed. Although several testers found the offset pedals uncomfortable on long journeys, aside from that there’s little to fault.

Rear passengers don’t fare quite as well. With its smaller wheelbase, the Laguna has less head and legroom in the back than the Ford. Still, the Renault is roomier than the Peugeot, and standard kit includes powered windows all-round, as well as blinds. Thanks to excellent noise insulation, the cabin is a relaxing place.

The refined 2.0-litre dCi engine offers similar performance to the other models here. It propels the Laguna from 0-60mph in 8.8 seconds – so in terms of straight-line pace, there’s little between the Renault and the Ford, with its 8.9-second time. But the power delivery and the smooth nature of the diesel are let down by the clutch, which isn’t as well weighted as that in the Mondeo. And the Renault’s gearbox is vague compared to that in the Ford, even if it’s not as notchy as the 407’s.

Ride quality is a slight disappointment. While the Laguna is comfortable and pliant on motorways, there’s simply too much movement on bumpy town roads. The dampers don’t control the suspension as well as the Mondeo’s, and this really shows up on A-roads, where the Renault just doesn’t deliver the same composure over rough surfaces.

The steering leaves you feeling a bit detached, and the road imperfections that patter through the suspension also cause the wheel to shudder in the driver’s hands. So, while the Laguna is great at shutting out wind and road noise and impresses with its refinement, it can’t match the Ford when it comes to driver enjoyment.

Don’t be mistaken – its handling is safe and predictable, while the standard stability control is far smoother and less intrusive than the Peugeot’s set-up. Body control and dynamics have both improved over the old car’s, too.

It’s just that Renault hasn’t done enough to ensure its new model can keep up with the latest Mondeo. Ford has moved the goal posts much further ahead, setting new standards for how a car in this class should handle, steer and involve the driver. The Laguna is left trailing.

It doesn’t help that the Dynamique S is £1,105 more expensive than the Mondeo, at £19,700 – although this spec brings auto wipers, cruise control and powered, leather seats as standard. There’s no doubt the Renault is better built and more luxurious than before. But whether it’s good enough to depose the Ford is the key question...

These three cars are pretty well matched on their official combined economy figures. In our hands, though, the new Laguna was the thirstiest, returning 37.2mpg. In its defence, our test model had covered the fewest miles from new.

Our experts have yet to estimate used values for the new Laguna. The old car retained 37 per cent – similar to the 407. This model might perform better initially, but we doubt it will be worth more than £7,500 after three years.

Scheduled costs have not yet been set. But the Laguna’s mechanicals are similar to those of the old car, so expect to pay £795 for three services. Bear in mind the network came a dismal 30th out of 32 in the Driver Power 2007 dealer survey.

Company drivers will account for a significant proportion of Laguna sales, and higher-band business users will pay £1,655 a year to run one. But there really isn’t much between any of these three cars in terms of fleet tax.