Established in this class, the big Lion is still a genuine contender. 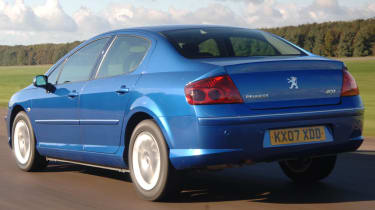 Since the 407 arrived in April 2004, the class it entered has changed dramatically, with VW’s latest Passat being launched, and now the Mondeo and Laguna. They are soon to be joined by a new Mazda 6, Vauxhall Vectra and Honda Accord. The Peugeot is in danger of being left behind.

But its unique styling, complete with a large, gaping grille, still stands out. Fans say it resembles a Ferrari; critics argue it looks like a fish. Either way, the most obvious feature is the big front overhang, designed for pedestrian safety. The Mondeo and 407 both have a five-star Euro NCAP rating for this – the Laguna has yet to be tested.

As a result, the front wheels are so far back, they make the 407’s dimensions seem slightly odd. And its 2,725mm wheelbase is 125mm shorter than the Mondeo’s, so legroom in the back seats is tight in comparison, while the sloping roofline intrudes on the headroom.

The 407 has the flattest transmission tunnel, which means the middle passenger on the back seat will be comfortable. Yet all rear occupants are more cramped than in the Mondeo.

It’s a similar story with the driving position. Due to the steeply raked screen, you sit a long way back and, despite the wide seats, the cabin doesn’t seem very spacious. The console design adds to the clutter, as there are lots of small buttons. The dashboard materials and plastics look and feel cheap, while the location of the gearlever makes it easy to bash your elbow on the cubby behind when changing ratios.

Add a flimsy shift action and springy clutch, and changing gear isn’t a pleasant experience. That’s a pity, because the 2.0-litre HDi engine, related to the Ford’s diesel, is fairly refined.

Despite near-identical power figures, though, it takes a second longer than the Mondeo to cover 0-60mph, completing the sprint in 9.9 seconds.

Both motors produce 320Nm of torque, but in the Peugeot it arrives 250rpm later, at 2,000rpm. That, combined with the 407’s 21kg of extra weight, gives the Ford the advantage in-gear. With a long sixth ratio, the Lion is particularly slow between 50mph and 70mph in top.

At 70mph, the Peugeot registers 68dB – that’s 1dB quieter than the Mondeo – but can’t match the Laguna for ultimate refinement at speed. This is primarily because there’s more tyre roar in the cabin, and wind noise round the mirrors. While the ride is good on motorways, the suspension lacks the ultimate control of the Ford. On bumpy A-roads, the Mondeo is more composed.

Driving the Peugeot over really rough surfaces is enough to send jolts into the cabin, and some kickback can be felt through the steering wheel. The 407 turns in sharply, and the steering is accurate, while it provides impressive grip. But the standard stability control system is a little too intrusive and the intervention can be unnecessarily aggressive.

In common with both its rivals here, the Peugeot gets a knee airbag as standard. And in this Sport specification, the 407 has a really long standard equipment tally. It comes with parking sensors, satellite navigation, Bluetooth connectivity, cruise control and automatic windscreen wipers all as factory fit.

Price: £19,825Model tested: Peugeot 407 2.0 HDi SportChart position: 3WHY: Saloon-only 407 scores with its distinctive styling, and will be a strong competitor to the Renault.

The Peugeot came in at 38.7mpg – no doubt this is helped by its slippery shape, indicated by the low 0.29Cd figure. But it’s also the heaviest car here. As it holds four litres less fuel than the Ford, the 407’s range is shorter, at 562 miles.

Large French cars usually depreciate heavily. However, the 407 is forecast to hang on to 37.3 per cent of its value over three years. That means it would be worth £7,395 – so it loses £1,200 more than the Mondeo.

Peugeot’s dealers didn’t fare well in Driver Power, either – they were voted 28th. And the 407 has the highest servicing costs, at £860 for three checks – although service intervals of 20,000 miles are the longest of the trio.

All three cars here fall into the 21 per cent bracket for business drivers, so it’s the list price that determines how much you will pay. The Renault and Peugeot are so closely matched, there’s a £10 difference between their tax bills.