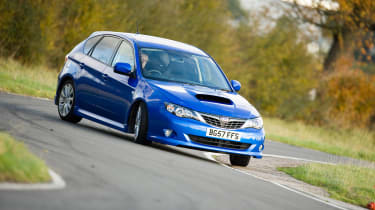 Few cars enjoy such a dedicated following as the original Impreza. But given the radical departure the new car represents, it’s going to be interesting to find out if existing owners will switch allegiance to the hatchback, or choose a rival model instead.

The standard Impreza is simply too anonymous and generic. The WRX does regain some of the styling cues found on the old car: wider arches, deeper bumpers and a bonnet scoop. However, such obvious detailing looks dated, plus the hatch has lost some of the saloon’s rally-inspired originality.

While the rising shoulder line helps give it a muscular profile, the short wheelbase and long overhangs mean it doesn’t look as modern and dynamic as the Honda Civic. Nevertheless, the conventional hatchback shape ensures the cabin is spacious, with the back seats providing a decent amount of legroom.

But the chunky transmission tunnel makes the middle seat uncomfortable, and the rear doesn’t convey the same sense of space as in the Honda, despite the extra light the larger back windows let in. The 301-litre boot is disappointing, too – the sloping tailgate limits versatility.

Even so, there’s no question the newcomer is more practical than the saloon. But the cabin design, assembly and layout fail to inspire.

The materials seem cheap, and the grey plastics are unattractive. While the build quality is solid, the Impreza feels old-fashioned, and the dash layout is the polar opposite of the modern Civic’s. As standard you get a multifunction steering wheel, which now offers reach and rake adjustment, and the sports seats are reasonably comfortable. But these additions do little to disguise the drabness of the Subaru’s cabin.

It’s the driving experience that fans of the brand love, though, and owners of the old car will feel instantly at home. Turn the key, and the 2.5-litre engine fires into life with the familiar offbeat noise of Subaru’s horizontally opposed layout.

This is carried over from the former model, and offers decent pace – the 6.5-second 0-60mph time is half-a-second quicker than the Civic’s. With 320Nm, it has a 127Nm torque advantage, so the Impreza is quicker in-gear, too.

But that’s only half the story. Given its large capacity, thirst for fuel and high CO2 emissions, the WRX’s power output isn’t that great. The unit doesn’t have the character of the older 2.0-litre turbo. And as the Subaru weighs 128kg more than the Type R, it doesn’t actually seem that fast.

There’s not enough urgency to the engine, and the car feels heavy under acceleration. This extra weight can be felt dynamically as well. There’s too much movement on the springs, while weight transfer in corners means the Subaru can’t match the Honda’s ability to change direction in an instant.

Grip is good, but the steering lacks the sharpness and accuracy of the Civic’s. Granted, the four-wheel-drive system means traction is excellent, and the Subaru will punch out of corners without scrabbling for grip like the Honda.

The ride is also more supple, and the Impreza is far more comfortable on A-roads. This means the WRX provides greater refinement on motorways, too – at 70mph, the Subaru is 4dB quieter than the Honda, at 67dB.

Stability and cruise control, plus xenon lights, are standard. But while the WRX retains its character, it simply doesn’t move the game on far enough, and feels no more capable than its predecessor.

Price: £19,995Model tested: Subaru Impreza WRXChart position: 2WHY: WRX is the first performance version of the new Impreza, and only 1,000 are being imported.

Subaru’s boxer engine isn’t the most efficient around. It has a bigger capacity and is mated to a 4WD set-up, so it’s no surprise the WRX is thirstier in this test. We averaged 23mpg.

Predictions for the new WRX have yet to be calculated, but the previous car retained 40.6 per cent of its value. That’s poor compared to the Civic, and we can’t see the new hatch improving much.

As well as having poorer economy than the Civic, the Impreza produces more CO2. And as it falls in the top 35 per cent tax bracket, higher-rate business users pay £2,799 a year to run it.

High emissions also affect road tax, which will be £300 a year. Add in pricier insurance and fuel bills, and the WRX is likely to cost more than 80 pence per mile to run.