Commonly referred to as ‘soft-roaders’, Langdale forest promised to be a tough test for our current compact 4x4 favourites. 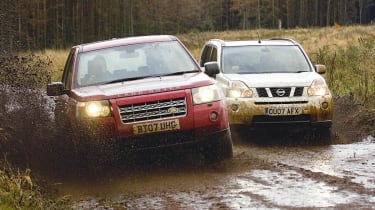 Given that these vehicles are commonly referred to as ‘soft-roaders’, the challenges of Langdale forest promised to be a tough test for our current compact 4x4 favourites – the Nissan X-Trail and Land Rover Freelander.

Take a look at the spec sheets, however, and there is a surprisingly rugged range of off-road goodies in each car’s armoury. Both get hill descent and traction control – the Nissan has three settings for its transmission and the Freelander features a simplified version of Land Rover’s excellent Terrain Response System.

So, on paper, they talk the talk. But can they walk the walk off the beaten track? Well, on the hard grit and gravel, the cars’ very different tarmac personalities are on show. The X-Trail is lighter and more agile, while the Freelander feels substantial and refined.

The Nissan is better on compacted surfaces – it’s less remote than the Land Rover, there’s plenty of feedback from the steering and it changes direction quicker. In fact, it has the feel of an oversized rally car – you simply use the brakes to loosen the rear end on the entry to a corner, then pick up the throttle to give you enough traction to straighten things up on the way out. And with its car-like body control, the lack of movement gives you the confidence to attack corners.

By contrast, the Freelander feels like a mini Discovery. The British-built machine is not as agile as the Nissan, but its ride over gravel is extremely impressive. The Terrain Response System allows you to tune the four-wheel drive to different surfaces, and it continues to excel once you head on to rocky and rutted sections.

The Land Rover has impressive cross-axle ability, and all its ground clearance angles are better than its rival’s. And it doesn’t have special off-road-oriented tyres, either! The well engineered traction control ensures that it drives well on mud and inclines.

In comparison, the X-Trail lagged behind. But given that it’s an SUV that performs much like a car on the tarmac, there was more body clearance than we expected. As with the Freelander, it has traction control, and while it doesn’t have a Terrain Response-style system with specific drivetrain choices for different surfaces, the i-Mode transmission has three settings: 2WD, auto and 4WD lock. The Nissan copes quite well in mud, and although it isn’t as accomplished as the Freelander in ruts and severe cross-angles, it coped impressively well.

The X-Trail is 65kg lighter than the Land Rover, but it felt rugged, strong and light on its feet in the mud. A tighter turning circle also helped when traversing small areas, and the reversing camera proved very useful when trying to see how much clearance you had at the back.

On a practical note, the Nissan’s wipe-clean boot surfaces and robust cabin materials are well suited to life in the mud. And the door seals didn’t leak when wading. On the other hand, one of the Freelander’s doors did let in some water when it went paddling.

Both cars are easy to drive, and are well suited to off-road novices. And while they certainly can’t cope with hardcore mud-plugging, this surprisingly capable pair can deal with conditions way beyond what most family buyers would ever subject them to.