When the going gets tough, you need one of these. Both the Hummer H3 and Jeep Wrangler have a utilitarian heritage instead of urban. 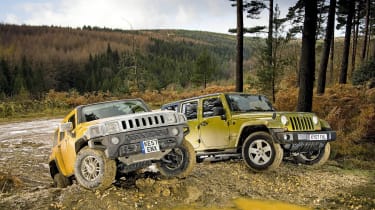 When the going gets tough, you need one of these. True, the Hummer H3 and Jeep Wrangler have an image that’s more Kings Road than off-road, but their heritage is utilitarian instead of urban. Both US machines have the military to thank for their existence.

The Jeep can trace its origins back to World War II, while the civilian Hummer takes inspiration from the army Humvee that first appeared 25 years ago. Although these are up-to-date models – both are new this year, in fact – neither is what you might call modern or luxurious. The Wrangler in particular has a very basic cabin, although it does seem more hard-wearing than the H3.

This is partly down to the clunky levers that control the four-wheel-drive system. They’re satisfying to use, but require a firm hand – the push-button selectors in the Hummer are more user-friendly.

That’s also true in other respects – the H3 simply feels easier to drive and more competent than the Wrangler. Both romped through all of our tests, but it was the manner of the performances that highlighted their distinct differences.

Although both feature relatively crude suspension technology which limits their on-road performance, in the rough the Hummer has much in common with the Discovery. It rides well and soaks up big bumps easily. This is due in large part to its chunky balloon tyres with their knobbly treads, but the suspension is also far more composed and settled than the jittery Wrangler’s.

This is most evident on rocky tracks and slopes. While the H3 distanced occupants from the action at Langdale, in the Wrangler you knew exactly what each wheel was up to. This did make it more communicative in some situations, but otherwise driver feedback is sorely lacking in the Jeep. The steering is hopelessly vague, the throttle only responds to hard prods and the brakes are wooden.

It doesn’t have as much wheel articulation as the H3, either. The Jeep lurched through the cross axle test and failed to stay fully under control on steep descents. In those two areas the Hummer reigned supreme – not even the Defender (see opposite) could match it. The leaf spring rear axle almost seems to disconnect from the bottom of the car, providing remarkable traction over boulders and through gullies. And although it has an automatic gearbox, in low ratio mode it descended rutted and rocky 35 degree slopes with complete confidence and control.

Two faults with the H3 are the positioning of the rear number plate and foglight. They’re attached below the bumper on UK-spec cars, and both came adrift during our departure angle tests. There are other flaws, too. The floor is so high that access is tricky, the twist-and-release handbrake is a pain, rear visibility is non-existent (although the Jeep’s isn’t much better) and the headlights are woefully weak.

But despite all that, the Hummer impressed us more than we expected. It’s fun to drive, extremely capable and feels like a Tonka truck for grown- ups. The Wrangler simply doesn’t have the same depth of ability; its suspension bottoms out sooner and it doesn’t seem as mechanically robust. No wonder the H3 pulled out a 12-point advantage.