With their diminutive proportions and bargain price tags, these tiny 4x4s are the minnows of the off-road world. 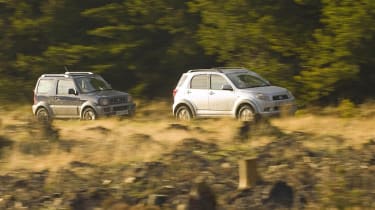 With their diminutive proportions and bargain price tags, these tiny 4x4s are the minnows of the off-road world.

But their size can be a big advantage, as squeezing between branches or turning around in tight lanes is easier in such small vehicles. They are narrow, though, so tend to struggle in ruts ploughed by wider 4x4s.

The Jimny feels very at home in the really rough stuff, giving you the sense that no matter how tough the terrain, it will remain indestructible.

And that’s a good job, because with a really short wheelbase – it’s 330mm less than the Terios – and a rugged suspension set-up, the Suzuki jumps around over furrows and rocks. Yet despite the 1.3-litre engine and 84bhp output, its light weight means it’s very good at keeping up momentum.

There’s a manual lever to select between 2WD and high or low 4WD modes, and the Suzuki climbs well in both all-wheel-drive configurations. It doesn’t have an electronically-controlled hill descent function, but it trickles down slopes without drama using engine braking in low mode.

Once back on the flat, the Jimny’s simple chassis means it’s fun to drive. Inside, though, it’s all a bit cramped and old fashioned.

By contrast, the Terios is far more modern. While the Jimny feels like a shrunken Defender, the Daihatsu is more like a city car that’s been transformed into a 4x4. The cabin is comfortable and the switchgear is borrowed from parent firm Toyota’s Yaris.

But how does it drive off-road? Surprisingly well! It can’t manage the extreme angles of the Suzuki, but it still navigates over rocks and ruts with ease. The creaks from the suspension give you the impression that harsher conditions hurt the Terios more than the Jimny, though.

It just doesn’t feel quite as utilitarian and indestructible as the Suzuki, although with permanent four-wheel drive and a diff lock, it climbs well. The Terios isn’t as surefooted as the Jimny on steep slopes, but on smoother gravel surfaces, it rides better than the Suzuki and feels more stable under braking.

While the pricier Daihatsu is a more modern road car, in the rough stuff, the rugged charms of the Jimny are hard to ignore.

The smallest, cheapest and probably the most oddball of the 12 cars we took to Langdale, these micro 4x4s might seem a little strange to lovers of massive SUVs. But they both generated huge smiles from everyone who drove them off-road.