We kick off with the most versatile 4x4s – premium SUVs. Why are they such great all-rounders? 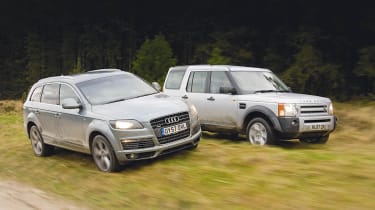 We kick off with the most versatile 4x4s – premium SUVs. Why are they such great all-rounders?

Well, so much is expected of them. We want them to be comfortable, upmarket, practical, sophisticated and luxurious. Both the Land Rover Discovery and Audi Q7 tick all these boxes with ease, and their on-road credentials are beyond doubt.

Both are seven-seaters, and have air-suspension and V6 diesels. But from there on they differ greatly. The Q7 follows the same sporting route as the BMW X5 and Porsche Cayenne, while the Disco looks to its roots for inspiration – off-road ability is still at the core of its appeal. But it brings Land Rover bang up to date with its pioneering Terrain Response system. You turn a dial to select the surface you’re on, then there are selectable low-range and height-adjustable air-suspension levers if required.

In comparison, the Audi only allows you to raise the height of its suspension via its MMI control interface. Nevertheless, the combination of 4wd and good ground clearance makes the Q7 reasonably competent on rocky routes, if not comfortable.

The sports suspension and low-profile tyres of this S line model don’t have much give, although surprisingly we found the stiff sidewalls were good at cutting out of soft ruts.

That aside, the Goodyear Eagle F1 rubber really held the Q7 back. The treads soon struggled to find grip on grassy slopes, and the German SUV doesn’t have the mechanical features necessary to increase traction – there are no locking differentials, for instance.

That was in complete contrast to the beefy Brit. The Disco’s open tyre tread generated more grip in all conditions, and when the rubber did struggle, its hi-tech 4wd system came into its own. Arguably, the Land Rover’s most impressive aspect, though, isn’t its traction, but its sheer comfort.

No other car here can soften the blows of a rocky track better – it seemed to glide over treacherous terrain with ease, distancing occupants from the real punishment the car was taking, yet also giving the driver huge confidence. The Q7’s tauter set-up made it far more jarring and prone to sudden lurches, thuds and bumps. Nor did the Audi have anything like as much suspension travel, which meant wheel articulation was limited.

We had to abort the tough cross axle test – where the front axle is twisted one way, and the rear the other – as two of the Q7’s wheels wouldn’t drop low enough to remain on the ground. The Disco sailed through this test with ease.

For arrival and departure angles there’s less to choose between them (the Land Rover grounded its rear bumper on a couple of occasions), and neither car had any difficulty tackling deep ruts or wading in water, as their heavy weight and powerful diesels pushed a bow wave through deep fords. But both suffered for their physical size – the Audi in particular. They felt unwieldy on narrow tracks, and gave the driver fewer options when picking a line. The Q7 compounds this problem by being hard to see out of. It feels like a sports coupé from behind the wheel, due to its raked windscreen and big A-pillars. The Disco has far better visibility.

Ultimately, the Audi felt well out of its comfort zone – one road tester likened it to rolling around on a rugby pitch in a dinner jacket. It could manage most of our challenges, but showed little panache or skill.

The Q7 was the polar opposite of the capable, commanding and brilliantly well controlled Land Rover. A score of 84 out of 100 is very impressive.