Rugged workhorses they might be, but are pick-ups really proper off-roaders? And can they hack it when the going gets tough? 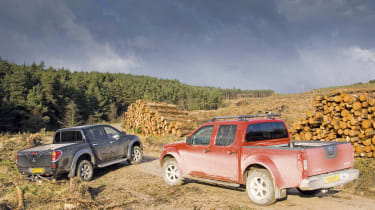 Rugged workhorses they might be, but are pick-ups really proper off-roaders? And can they hack it when the going gets tough? Well, with lofty cabin heights and decent wheel clearance, both the Nissan Navara and Mitsubishi L200 certainly look the part.

However, the first problem we encountered with these load-luggers was their sheer size. Both are more than five metres long, and even the Audi Q7 felt small in comparison.

This makes turning in tight tracks or manoeuvring around obstacles difficult – the Nissan suffers most because it’s longer and also has a woeful 13.3-metre turning circle.

But on flat, open and compacted gravel, the bulky Navara is not as cumbersome as you would expect. In rear-wheel-drive mode, it can be thrown about like an overgrown rally car. What’s more, the well controlled body and decent steering means it inspires more confidence than the vague L200.

The Mitsubishi feels a little old-fashioned – the engine is less refined, and the chassis creaks and shakes far more than its rival’s. As a result, the Navara wins hands down on hard gravel, although both cars have poor brakes. The Nissan’s centre pedal is firm and slow to respond, while the L200 has an unnerving amount of travel before anything happens.

Once into the really rough stuff, this doesn’t matter as much, and both coped well with mud, ruts, grass and rocky terrain. Despite a bigger load deck and a longer rear overhang, the Navara has better ground-clearance angles. However, it did scrape its rear end a little as it left declines.

The Nissan has an easy-to-use electric knob to switch between 2WD and 4WD, while the Mitsubishi has an outdated lever to change the drivetrain options. This stick vibrates a lot, but you do at least get a dash display to tell you which mode you have selected.

Both pick-ups have a low-ratio setting to help with inclines and deep mud. And while the Nissan’s manual gearbox requires more driver input, it’s still much better to use than the L200’s poor auto. Both pick-ups waded quite well, too, but lacked hill descent control.

So, overall, these builders’ favourites coped favourably in Langdale, which is just as well, because they probably get used off-road far more than a lot of the vehicles in this test. Better engineered, more refined and with car-like handling, the Navara performed with style and confidence in our off-road tests.

While not as much fun as the mini 4WDs, these two don’t isolate you from the outside world like the Discovery. And even next to ultimate off-roaders such as the Hummer, the pick-ups proved they are much more than simply wannabe mud-pluggers.