Big SUV scores on space and practicality. But do costs let it down? 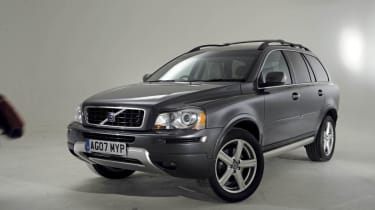 THE XC90 has been a hit for Volvo – not because of its rugged ability, but due to its family-friendly interior. It mixes the seven-seat practicality of a people carrier with the chunky looks and go-anywhere skills of an off-roader.

When it comes to packing for a weekend away, it will be difficult to beat, because it’s the only 4x4 in our quartet. Towing a caravan through a muddy field poses no problems to the big Volvo. What’s more, thanks to its excellent refinement, it’s a pleasure on the road, too.

And you should be able to fit everything in, because the SUV is the biggest car in this test. Measuring 4,798mm long, it feels huge from behind the wheel, and if you look over your shoulder, the cabin seems to go on forever. This is great news for storage, although with the third row of seats folded away, its 615-litre boot can’t quite match the 626 litres offered by the shorter Honda. Using all seven seats eats into the luggage space, with only 249 litres behind them. Drop them all, and the XC90’s enormous dimensions pay dividends, with a van-like boot space of 1,837 litres – the biggest here.

Loading the Volvo is easy, as there’s no need to stoop into the luggage bay and there’s no lip to lift objects over. Its split tailgate is perfectly suited to outdoor activities, and serves as a useful bench when dropped down.

Thoughtful touches include a 12V power socket in the boot and storage cubbies galore, with lidded compartments on either side. Each seat in the middle row slides independently, so you can maximise load space or legroom.

The third row isn’t so clever, and it’s here where the Volvo is beginning to show its age. The chairs are more fiddly to raise than in rival systems, and once up are only big enough for children. A six-foot adult will find their knees pressed against the seat in front and their head buried in the roof lining.

And the XC90’s size counts against it at the pumps, too. We managed only 25mpg in our D5 oil-burner, and with diesel averaging £1.30 per litre, refills of the 80-litre tank will seriously dent your wallet. So will bills for servicing and replacement tyres, because the Volvo has the running costs of a prestige car. The D5 engine delivers decent straight-line performance, but it’s noisy by modern standards. The tall driving position comes with compromises, too – although you get a commanding view out of the car, body roll is an issue on twisty roads.

So, does the Volvo do enough to justify its price? Or is it ultimately compromised by its attempt to be all things to all men?

Model tested: XC90 D5 SE SportWHY: SUV is the largest car here. We want to see if the flexibility of its seven-seater cabin outweighs its running costs.

BIG Volvo has a hefty list price, and suffers most from dreaded depreciation: after three years and 36,000 miles, you can expect to have lost £20,475. And that’s before you consider fuel, tax, servicing and insurance costs – the XC90 is easily the most expensive car of these four to run. At today’s diesel prices, it will end up costing you around £32,158 if you sell it on its third birthday – so the XC90 is by far the most expensive car in our test.