Does budget choice demand too many day-to-day compromises? 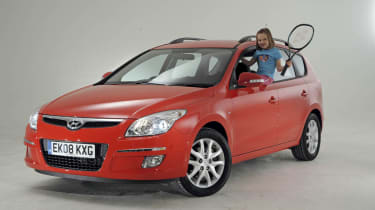 WHILE Honda expects the Accord to compete with prestige models from BMW and Mercedes, the Hyundai has more mainstream ambitions. The i30 has the tough task of challenging cars like the Ford Focus and Vauxhall Astra. It’s nearly half the price of the new Tourer – so can it beat its Japanese rival in our test?

Refreshingly, the Hyundai doesn’t have any gimmicks. It’s not weighed down with costly, needless extras, as it does everything you need it to, and nothing more.

Practical touches include a set of roof rails – as on the Volvo and Honda – plus a USB input in the centre console that allows you to control an iPod music player using the stereo. Our Style model also has part-leather trim and tyre pressure monitors.

It misses out on the Honda’s luxuries, such as cruise control and sat-nav. You also get simple rotary controls for the air-con, rather than a complicated climate control set-up. There are far fewer buttons inside and the dashboard appears more simple; the materials are less expensive, but it looks good and build quality is first rate.

The i30 Estate is 270mm shorter than the Honda, and as it takes up less space on the road, it’s smaller inside. Lift the conventional tailgate and you’ll find a 415-litre boot. This increases to 1,395 litres – 257 litres less than in the Accord Tourer – if you fold the rear seats. There’s also a shallow oddments tray beneath the floor and a power socket to the side. The boot is narrower than the Honda’s, but if you pack carefully you won’t be forced to leave much behind on your camping trip.

You’d expect the Honda to race ahead on the road, but the Hyundai is an impressive performer. Its 113bhp diesel has 255Nm of torque, so while the Accord is faster and more refined, the performance gap isn’t as big as the two car’s respective prices would suggest. While the i30 is refined, it doesn’t feel as sporty to drive and you only get five ratios. Its gearbox isn’t as good to use as the classy alloy lever in the Accord, either.

The i30’s smaller dimensions come into their own when you look at the economy figures, with returns of 45.8mpg. That gives a realistic range of 534 miles in between fill-ups – only 36 miles less than the Accord.

As a result, over three years, i30 buyers will pay a massive £6,292 less than drivers running an Accord, and there are fewer compromises than we expected. But is the Hyundai the best buy in this test, or should you take another step down the ladder?

WHY: You get a lot of car for your money with the Hyundai. A low CO2 rating means it’s also one of the cleanest family cars.

AFTER three years, the i30 will leave you £6,292 better off than you would have been if you’d bought the Honda. That’s an incredible £16,990 saving over the same period with the Volvo – and makes the Hyundai a clear winner. If proposed changes to road tax come into force in 2009, the cost of a year’s disc for the Korean car will fall to £90 from £120 today, as it emits 128g/km of CO2. In contrast, the price of the Honda’s tax will increase by £5.