Smallest car on test makes a big impression with its versatility. 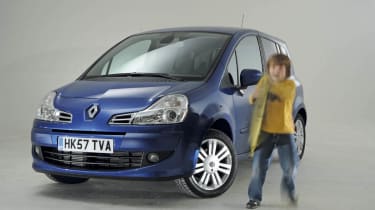 RENAULT has an impressive track record for designing spacious and practical family cars. The original Espace MPV was a revelation in 1984, and the smaller Scenic made a similar impact when it broke cover in 1996. The Modus has struggled to emulate the success of its famous predecessors, but can it spring a surprise over its more costly rivals in this test?

Although it’s small, the quirky Renault makes the most of what it’s got. At just over four metres long, it’s more than a metre shorter than the Volvo and 440mm shorter than the Hyundai. But a tall body and high roofline ensure the cabin is spacious. If this was a competition to see which car has the most storage cubbies, the Grand Modus would walk it, as there is an array of places to lose sunglasses, pens, sweets and ice scrapers.

None of these is any good for camping gear, though, and the storage areas can’t disguise the fact that the Grand Modus has the smallest boot. It is also the only car with a raised load lip, and you need to lift heavy items over this before you can set them down, rather than pushing them in as you do in the other models.

A sliding rear bench lets you balance legroom and boot space, but with the seats all the way back the load area is restricted to 305 litres. Thankfully, the boxy shape of the boot means every millimetre is usable. And if your rear passengers can survive with less legroom, you can slide the seats forward to boost the capacity to up to 410 litres – nearly as much as the Hyundai offers.

Fold the rear row chairs and the boxy load area offers a whopping 1,454 litres of space – 49 litres more than in the i30. But the process is more involved. The heavy chairs tumble against the front seats rather than folding flat. Performing this task while leaning into the boot is awkward, and they take up lots of space.

Climb behind the wheel, and the Grand Modus loses ground on its rivals. It can’t match the luxury feel of the more expensive cars in this test, and the simple dash is short on buttons and switches. Even more disappointing is the way the Grand Modus drives. Its diesel is raucous, and sounds louder than our noise readings suggest.

The notchy gearchange, springy clutch and grabby brakes take all the pleasure out of driving, too. Although the ride is smooth, the tall body rolls in corners and the steering provides minimal feedback.

Visibility is excellent, as is all-round headroom. The 1.5-litre engine performs well, but it will be another story with a full load of camping gear and passengers on board. Will buyers be able to overlook all this when they see how low the price is and how cheap the Modus is to run?

WHY: Even though it’s the smallest car in this test, Renault supermini-MPV is practical, and has an efficient diesel.

THE smallest car here has the lowest running costs – but only just. Our calculation after three years and 36,000 miles comes to £14,540, which is only £576 less than those of the Hyundai. As the i30 is better to drive and more attractive to look at – plus comes with a five-year warranty – that makes it a very tempting choice. However, the Grand Modus is seriously cheap to tax, with a year’s disc £35 at today’s rates – and only £30 in 2009.