Diesel holdall has been made into an even stronger package. 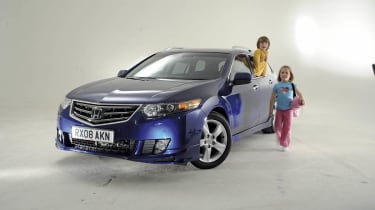 ESTATE cars always used to be about luggage space, but the latest generation of sleek, Touring-style models puts looks ahead of practicality.

The previous-generation Accord was the exception – its vertical tailgate and boxy profile prioritised function over form. The all-new car reverses those design principles, however. Honda’s stylists have followed the herd with a fashionable sloping rear windscreen and tapered roofline.

Judged on looks alone, the car is a success, as it’s by far the most handsome model on test. The trouble is, the change of shape will ultimately limit the amount of luggage you can cram in the back.

Nevertheless, the Honda manages to teach the longer Volvo a thing or two about practicality. Its load area has a capacity of 672 litres, and is 1,100mm wide – that’s only 30mm narrower than the XC90. Just as impressive is the new Accord’s ability to swallow smaller items. Lift the boot floor, and you’ll find a huge hidden storage bin for wet stuff or valuables, plus smaller lidded compartments on either side.

Once the rear seats are folded, the Honda can’t match the Volvo for raw space, and for all its on-paper room, you can’t fit two sets of golf clubs in the back of the Tourer without dropping at least part of the rear seat – not good enough for a car of this size.

The folding mechanism is simple to operate and you don’t have to remove the back head restraints. But as the rear squabs don’t lift the end result isn’t completely flat.

On the road, you’ll instantly see the benefits of trading down from the large, tall Volvo. The low-slung Accord feels much more agile and responsive.

Its new 2.2 i-DTEC diesel engine provides excellent performance. Not only is it smooth, quiet and torquey, but the unit also gives the Honda better pace than the XC90. CO2 emissions are lower, too, while the slick six-speed manual transmission provides the Accord with a sporty feel that’s missing from its bigger rival.

It won’t be as capable on wet campsite grass, but at the end of the holiday at least you can look forward to an entertaining trip home in the Honda. And with sat-nav as standard, you won’t get lost on the way.

The navigation system is part of a raft of kit that’s included on our flagship EX GT – so you won’t feel as if you’re trading down. But the switchgear on the console looks confusing. There’s even a powered tailgate, although you still have to press a button to operate this, which limits the benefit when you’re weighed down with shopping.

At £26,210, this top-spec Accord Tourer is  £11,085 cheaper than the Volvo, and demands few compromises in overall practicality. Yet the question is whether the next car on our trading down ladder does a better job.

Model tested: Honda Accord Tourer i-DTECWHY: Big on style and even bigger on space, the all-new Accord builds on the strengths of the previous generation.

CHOOSE the Honda instead of the XC90, and you will save £10,659 after three years and 36,000 miles. Most of that comes from its better residual values (it loses £13,368 this way), although the Accord’s lower fuel bill over three years (£5,754 compared to £8,517 in the Volvo) also contributes to that figure. The Honda Happiness servicing pack isn’t cheap at £850, but it covers five years of checks, and can be transferred to the next owner.